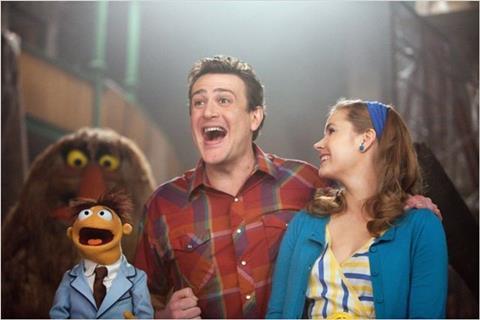 With most modern-day reboots and remakes of popular franchises, the trick is to adopt a darker, more realistic approach to the source material. Happily, that’s not the case with The Muppets, a genial, goofy, warm salute to Jim Henson’s venerable creations. Bringing back Kermit, Miss Piggy, Fozzie and the rest for a new adventure, this Disney offering does the nifty trick of both milking the audience’s fond nostalgia for the characters while simultaneously giving their silly humour and idealistic spirit a freshness that suggests how relevant the gang remains more than 30 years after their big-screen debut.

Opening November 23 during the thick of Thanksgiving week, The Muppets will be squaring off against plenty of family fare, including Hugo, Arthur Christmas and Happy Feet Two. But Kermit’s crew may benefit from audience familiarity and a loyal older demographic that will be just as excited about the movie’s arrival as their kids – if they even have any. The Muppets brand might not be the most potent after so many years in the shadows – a fact that’s joked about in the film – but strong reviews and stronger word-of-mouth could overcome that obstacle.

Brothers Gary (Jason Segel) and Walter (performed by Peter Linz) have been close since they were kids, sharing a love of The Muppets that has stayed with them into adulthood. When Gary and his long-time girlfriend Mary (Amy Adams) decide to take a trip to Los Angeles for their 10th anniversary, Gary invites Walter along so that they can visit the rundown Muppet Studios, but once they get there they discover than an evil businessman (Chris Cooper) plans to demolish the site so he can drill for oil underneath. The only way to prevent this is if Gary and Walter can raise $10m to buy back the land, which provokes them to bring Kermit and the rest of The Muppets out of retirement to do a big telethon.

Directed by James Bobin (best known for his work on The Flight Of The Conchords and Da Ali G Show), The Muppets draws as much from The Muppet Show of the 1970s as from the Muppet movies, specifically 1979’s The Muppet Movie. As with those earlier iterations, felt puppets interact with human stars – sometimes playing themselves – for a series of knowingly broad gags and sweet, emotional moments. Segel (who co-scripted the film with Get Him To The Greek writer-director Nicholas Stoller) wisely doesn’t try to reinvent or “hip up” The Muppets, instead sticking to the established personalities of each character, which are resonant enough to still be deeply enjoyable.

For the first several reels, The Muppets is nearly perfect with its winningly dopey musical numbers and joyful humour. Very quickly, the film establishes Walter’s desire to find his place in the world – even though he’s a puppet, he doesn’t consider himself worthy of being one of the sainted Muppets – and Mary’s frustration at Gary’s disinterest in getting married. Though Bobin has largely worked on satirical, edgy TV shows, his Muppets radiates good cheer throughout, managing to create a magical, silly world in which even the usually serious Cooper is on the movie’s sly, playful wavelength.

Because The Muppets’ first half is so superbly handled, it’s a bit disappointing that the whole film can’t maintain that inspired tone. Ultimately, there are probably too many character arcs to juggle – Gary and Mary’s troubles start to feel superfluous – and the jokes and songs start to thin out a bit before the finale. (Sadly, The Muppets is yet another movie that learns the hard way that having white actors rap isn’t nearly as funny for the audience as it might seem to the filmmakers.) But Bobin and his writers do an excellent job of addressing The Muppets’ seeming irrelevance head-on, first through self-deprecating humour and then later by firmly suggesting that especially during troubling times these lovable hand-puppets’ idealism is something we need now more than ever.

For a movie in which the human actors eventually take a backseat to The Muppets, good performances aren’t necessarily that crucial, although Segel’s wide-eyed innocence is spot-on. Adams would seem tailor-made for this sort of blissfully naïve entertainment after her turn in Enchanted, which makes her underwritten role a real shame. But Cooper nicely plays the film’s heavy without overdoing it. As for The Muppets, those who grew up with Henson and Frank Oz performing these iconic characters might be a little thrown hearing different voices coming out of Kermit and Miss Piggy, but they’re close enough to the originals that the disorientation shouldn’t last long. And, yes, the new movie’s rendition of “Rainbow Connection” will probably make you cry.