The Necessary Death Of Charlie Countryman 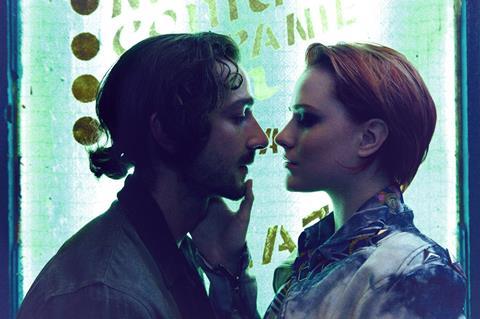 Shot in Bucharest, The Necessary Death Of Charlie Countryman is a disjointed odyssey and not a rousing commercial for its lead actor, Shia LaBeouf.   The film, a first feature by commercials maker Fredrik Bond, is an overwrought parable that will test the loyalty of LaBeouf’s fans.

Deploying every cliché about Romania (Dracula’s accent seems to have been the standard for dialogue), the film insults one of its obvious markets. Interest outside the US and Romania will depend on the Labeouf mystique, although Mads Mikkelsen in the role of a violent thug could help the film in Europe.

Despite that, the film’s comic-book exoticism and relentless violence could still fuel a cult following for Charlie Countryman, with the right promotion.

The saga opens with the upended mutilated body of young Charlie Countryman (LaBeouf) on a rope – one of many Christ references. The narrative goes back in time to the bizarre wish of Charlie’s dying mother (Melissa Leo) that he visit Bucharest.  As an avuncular voice-over by John Hurt tries to tell us what all this means, Charlie’s adventures unfold – a voluble Rumanian man dies in the seat next to him on the plane; police arrest Charlie when his plane lands:  the dead man’s anguished daughter, Gabi (Evan Rachel Wood), has a violent sadistic ex, Nigel (Mads Mikkelsen), who wants to kill Charlie; two Brits at a hostel take Charlie to a sex club. The trail of adventures and violence crawls through the Rumanian capital.

Bond, directing a script that Matt Drake based on his experiences teaching school there, presents the picaresque episodes like a series of long commercials. To say that the result is incoherent is like saying that Romania is struggling with financial problems. It’s not even clear why LaBeouf’s character is called Charlie Countryman.

This is a film filled with paradoxes. Bespeaking confidence (and the flair of a displaced wise guy from early Scorsese), LeBeouf’s long dark hair is slicked back. Yet he’s no tough guy. Charlie is a punching bag for anyone who wants to hit him, and in this film Romania is a country of hit men and enforcers, many of whom wear uniforms.

Strains of magic realism suggest that coherence is not what Bond is after. Ultimately, The Necessary Death Of Charlie Countryman is a love story, with LeBeouf either running after Gabi, the tortured soul, or running from Nigel, the torturer. Cinematographer Roman Vasyanov (who shot the stylish 2008 Russian teen musical Hipsters) captures the young star, with long locks bouncing as he runs, in shots with more improbable angles than a Nike ad.  The music – throbbing in a sex club, pounding in scenes of pursuit, moaning in atmospheric “Romanian” moments – substitutes for the momentum that’s often absent.

Production values are high, with tactile filming reminiscent of Danny Boyle’s Trainspotting and logistically deft chases turn the Bucharest subway into a futuristic battleground. Yet the script has a cryptic laughable sententiousness that isn’t always meant to be funny. Romanian fatalism is explained on the plane to Bucharest in American terms – the country is the East European version of a baseball team of perennial losers, the Chicago Cubs: “It is problem that makes us who we are, same as Cubbies.”

Threats in accented whispers promise a range of horrible deaths. “You’re like a wind of shit in my life,” Gabi tells Charlie, trying to get rid of him for his own good. Perhaps she was thinking of the misfortune of a Brit whom Charlie encounters who takes a dose of potent Rumanian Viagra.  Like this film, the promise of adventure and fun in an exotic land seemed like a good idea, but the result was an uncomfortable jolt.