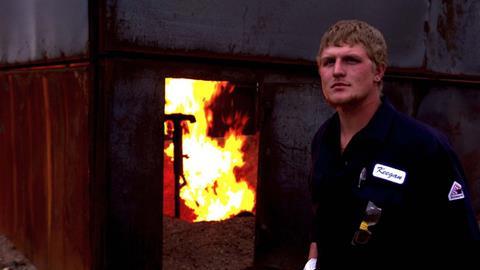 America likes to pride itself on being a land where people can reinvent themselves, on being a country that’s hospitable to new beginnings and second chances. The Overnighters drives a stake through the heart of those lofty beliefs: This despairing, terrific documentary presents a world where distrust thrives and fresh starts are in short supply. But it’s also a story about one good pastor trying his best to fight against that cynicism — his heroic efforts are moving, but they may not be enough.

Shot over two years, the documentary has its patience rewarded with a plot twist about midway through that complicates our feelings about Reinke’s good judgement.

Premiering at Sundance, where it won a special jury prize, and appearing at the True/False Film Festival, The Overnighters will ride stellar reviews to a solid theatrical run. The timeliness of the issues at play — particularly its addressing of America’s seemingly endless economic slowdown — will only help raise this documentary’s profile.

The film takes us to Williston, North Dakota, a small community that has recently become a hiring hot bed thanks to an oil boom brought about by the controversial hydraulic fracturing technique known as fracking. As a result, people desperate for work from all over the country have been moving to Williston, discovering that there are far more applicants than available jobs.

Assisting those without work and in need of a bed, a Lutheran pastor named Jay Reinke has opened up his church to these modern-day homeless migrants, whom the community has dubbed the Overnighters. Reinke believes his duty as a Christian compels him to care for these people, but when the city experiences a rise in crime, including murder, the Overnighters — mostly men with families back home to support — begin to wear out their welcome with the locals.

Directed by Jesse Moss (Full Battle Rattle), The Overnighters sets up to be a battle between Reinke’s kind-hearted spirit and a small-minded town’s suspiciousness. Though there’s no question that some of the pastor’s temporary tenants have unsavoury backgrounds — criminal records, battles with addiction — their refrain of wanting a better life resonates, and in Reinke they’ve found a most welcome champion. The centrepiece of this story, Reinke comes across as a sweet, reasonable man who can’t understand why those around him aren’t as accepting of these newcomers as he is. (Where his neighbours see trouble, he sees an opportunity to demonstrate the charity and love that are preached about in the Bible.)

That standoff alone would make for a superb documentary, illustrating the cracks in an American Dream that promises opportunity for everyone but, in practice, often looks with contempt upon those who are struggling. (Revealingly, one neighbour tells Reinke that “it’s not my problem” when the pastor tries to appeal to the man’s sympathies by mentioning these outsiders’ economic plight.) Without making them saints, Moss effectively humanizes several of the Overnighters through a handful of scenes, putting a face on poverty and lower-class struggle that’s too often glossed over in American entertainment.

But after establishing this economic reality and the conflict within the community, The Overnighters moves into thornier, more shocking territory. Shot over two years, the documentary has its patience rewarded with a plot twist about midway through that complicates our feelings about Reinke’s good judgement. To say more would constitute a major spoiler — which, in fact, leads to an even bigger spoiler later in the film — but as The Overnighters unfolds, what becomes clear is that Williston isn’t a place of bright new tomorrows but, rather, a final confirmation that some people just don’t seem destined to find a happy ending or outrun their demons.

In Reinke, Moss has found a superb subject who might challenge some viewers’ negative impressions of religious leaders. Though a Christian, he doesn’t adhere to the right-wing, bigoted stereotype we’re accustomed to seeing in the media. Instead, he’s a non-judgemental soul who believes that no one is beyond saving. But what makes him fascinating is the air of mystery around him: His loving, long-time wife can’t quite explain why he’s always been so trusting of strangers. And when community pressure starts to force him to expel certain Overnighters from his church, their accusations about his supposed hypocrisy make one wonder if there’s more to this man than meets the eye.

Consequently, we start to question Reinke’s inspiring selflessness, in a way becoming as guilty of suspiciousness as the residents of Williston. This is the slow twist of the knife that The Overnighters wields, demonstrating that none of us are immune from assuming the worst about our fellow man. In a different environment, The Overnighters might have been a feel-good story about how a small town learned to put away prejudice and embrace the lowliest among them. Sadly, that’s not what happened in Williston — and, one fears, it’s not the way it often happens in America, or anywhere else.