The Perks Of Being A Wallflower 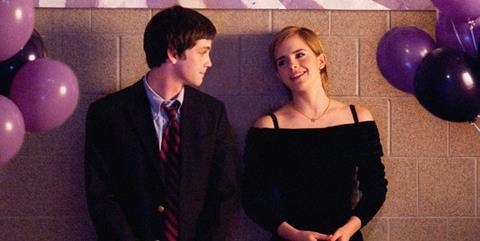 The Perks Of Being A Wallflower doesn’t have much new to say about adolescent angst or the perils of first love, but this drama’s ability to conjure up the immediacy of teen life in all its agony and ecstasy is so potent that one may not mind the material’s conventionality. Guiding a strong young cast through a sometimes meandering coming-of-age narrative, writer-director Stephen Chbosky (adapting his own novel) shows clear affection for his characters, wisely preferring the quiet emotional moment to the overreaching dramatic gesture.

Friendship, identity, and love are Perks’ central obsessions, but buried underneath all this is a secret from Charlie’s past, a darkness to which the movie alludes on occasion.

Following its debut at the Toronto Film Festival, this Summit release will open in the US on September 21, hoping to attract some attention thanks to stars Logan Lerman (Percy Jackson & The Olympians) and Emma Watson (the Harry Potter franchise). Its high school milieu isn’t terribly different from that of dozens of other teen dramas, though, so strong reviews will be needed to help raise the film’s profile beyond those familiar with the 1999 novel.

Set in Pittsburgh in 1991, The Perks Of Being A Wallflower follows shy, sensitive freshman Charlie (Lerman) as he prepares for high school. An outcast because of his brains and introspective manner, he soon befriends some quirky seniors, including the extroverted prankster Patrick (Ezra Miller) and his pretty stepsister Sam (Watson), whom Charlie immediately falls for.

Friendship, identity, and love are Perks’ central obsessions, but buried underneath all this is a secret from Charlie’s past, a darkness to which the movie alludes on occasion. While the eventual revelation of this secret offers a dramatic third act twist, it proves to be a somewhat artificial emotional wallop for a film that’s far better when it acutely observes these characters negotiating the malaise of teenage uncertainty through the mundaneness of mixtapes and school dances.

Lerman could be faulted for being almost too withdrawn as the titular wallflower, projecting a sweetness that doesn’t always hint at the character’s hidden anguish. Much better is Watson as his idealized crush, conveying the same sexy spunk that she provided Hermione in the Harry Potter films. But at the same time, Watson ably suggests the vulnerability and neediness that undercut the character’s sassy exterior.

Best of all, though, is Miller. Cementing his position as a rising talent after strong turns in Afterschool and We Need To Talk About Kevin, Miller makes Patrick a charismatic, complicated young man who is just the right person to help Charlie emerge from his shell. At one point, Patrick jokes that his life has become as clichéd as an after-school special, and while the same charge could be levelled against Perks in its weaker stretches, the delicate, warm rapport between the three leads makes you grateful to be in their company, even if their woes aren’t particularly novel.

Screenplay: Stephen Chbosky, based on his book