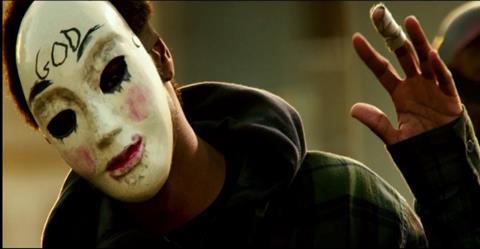 Expanding the world of its close-quarter predecessor, The Purge: Anarchy proves to be a tenser, darker and better experience than the subpar 2013 original. This franchise’s underlying conceit — in a future America, citizens are given 12 hours per year to commit whatever crime they want — remains absurd, but writer-director James DeMonaco has come up with a sequel featuring new characters and a sturdy action-thriller framework that mostly transcends the ham-fisted sermonising.

The Purge: Anarchy is little more than well-done genre fare — it won’t linger in your memory for even 12 hours — but it’s darkly effective and consistently gripping.

Set for release in the States on July 18, The Purge: Anarchy hopes to capitalise on the surprise success of last year’s The Purge, which brought in $89m worldwide on a reported $3m budget. Universal is betting that the Purge conceit is Anarchy’s biggest marketing hook — after all, most everyone from the original died — which makes this film something of a novelty in a summer of sequels mostly tied to a recognizable character or star. With that in mind, the commercial stakes are relatively low: Even if the movie is only a mild theatrical performer, profitability should be easily attained once ancillaries are calculated.

Unlike most sequels, The Purge: Anarchy doesn’t require the viewer to have seen the original. The only element that crucially connects the two films (other than DeMonaco’s participation) is the notion that, in the early 2020s, the U.S. government allows individuals to enjoy 12 hours of continuous lawlessness for one day every year. (As it’s explained in this film series, the Purge has been instrumental in reducing the crime rate by allowing people to unleash their darkest tendencies during this sanctioned annual event.)

Where The Purge focused on a family (led by Ethan Hawke) under siege at their home by masked murders, Anarchy follows a group of disparate, innocent characters who find themselves on the street the night of the Purge looking for sanctuary. Their saviour comes in the form of an unnamed man (Frank Grillo) who wants vengeance for the death of his son. (In the film’s press notes, he’s identified as Leo, although that name is never spoken during the movie and is not used to identify the character, who’s simply labelled “Sergeant,” in the end credits.) After seeing the helpless individuals around him, though, he puts aside his Purge plans in order to protect them from the city’s bloodthirsty roving mobs.

With nods to Escape From New York and other R-rated action movies, The Purge: Anarchy is, at heart, a zombie film, DeMonaco pitting our main characters against a seemingly never-ending supply of approaching marauders. (The fact that the Purge enthusiasts wear masks only strengthens the similarity to their ghoulish, undead counterparts.)

Grillo’s square-jawed protagonist is cut from the same cloth as Kurt Russell’s Snake Plissken, cracking no jokes while ably flaunting his lethal talent for firearms. (The character’s backstory is kept teasingly vague throughout most of Anarchy, but the implication is that he has previous experience with weapons.) The actor, who has been impressive in supporting turns lately in Warrior and The Grey, easily conveys this unnamed man’s stoic heroism and buried anguish. More importantly, Grillo is a commanding onscreen presence, which is critical since he’s playing a stereotypically larger-than-life everyman protector. Grillo has the physicality and no-nonsense demeanour for the role, but his refusal to push into camp gives this genre film-cum-political parable a much-needed grounded, emotional centre.

Perhaps inevitably, the unnamed man’s charges are less interesting and less competent than he is. (It’s an unfortunate tradition in zombie films that the self-sufficient characters are often dragged down by the idiotic decisions of their cohorts.) A mother-daughter pair (Carmen Ejogo, Zoë Soul) is mostly tolerable, which can’t be said of a married couple (Zach Gilford, Kiele Sanchez) whose relationship troubles form an unsatisfying backdrop to their whining and general ineffectiveness during the Purge. Rather than raising the stakes, these characters’ failings create needless obstacles for Grillo’s vigilante, in the process making them seem undeserving of his protection.

With the Purge’s 12-hour period beginning in the evening, DeMonaco makes good use of nighttime locations across downtown Los Angeles, emphasising the city’s less-glamorous industrial sections, which give the film a bombed-out, almost apocalyptic vibe. The dark, unpopulated streets have a chilling emptiness to them, the hint of danger always around the corner. (The characters are mostly on foot throughout Anarchy, making their battle for survival all the more treacherous.)

However, the sickening sense of dread that hovers over the movie doesn’t completely obscure the nagging logic problems of the premise. Clearly, DeMonaco is commenting on America’s economic inequality and unhealthy fascination with violence — Grillo and his associates discover what sick games the wealthy play with the poor on Purge night — and there’s no denying that Anarchy’s sense of societal collapse has its resonances. But DeMonaco tends to overstate his points, and the franchise’s conceit remains confusing. (For example, why would anyone during the Purge be in an enclosed space with people he didn’t completely trust? And would an annual 12-hour crime spree really produce less crime the rest of the year? Wouldn’t the emotional repercussions from these murders be toxic?)

Nonetheless, DeMonaco has developed as a filmmaker since the first instalment: He’s far more agile now with action scenes and suspense sequences. The Purge tried its best to capitalise on its claustrophobic setting, but it turns out that a broader canvas works better for the follow-up, suggesting an entire society run amuck. The Purge: Anarchy is little more than well-done genre fare — it won’t linger in your memory for even 12 hours — but it’s darkly effective and consistently gripping.