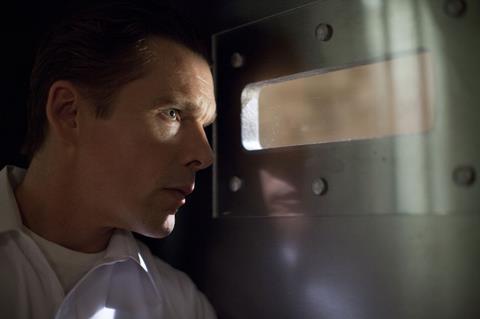 Some potentially thought-provoking moral questions about class and self-preservation are in service of a terribly ludicrous premise in The Purge, a dark allegory that never justifies its central conceit, dooming all that follows. Writer-director James DeMonaco’s home-invasion horror-thriller has its moments of sustained dread, and Ethan Hawke brings some intensity to his role as a man who must defend his family during a night of sanctioned annual lawlessness. But because the filmmaker never satisfactorily explains the rules of his bizarre future society, it’s nearly impossible to generate much empathy for the situation or his characters.

The Purge’s cast do what they can to sell this wobbly premise, mostly by treating it as completely reasonable, but even here DeMonaco hasn’t sufficiently thought through his ideas.

Opening in the US on June 7 after landing in the UK a week earlier, The Purge looks to be a mediocre theatrical prospect, no matter the film’s advertising linking it to Jason Blum, the producer of the Paranormal Activity movies and Sinister, which also featured Hawke. Without much star power, the film will need to rely on a plot hook that may at first seem intriguing but soon proves nonsensical. DVD and cable appear to be far better bets for this forgettable offering.

Set in the year 2022, The Purge explains in its opening that the US is now almost completely crime-free, except for one 12-hour period (from 7pm to 7am) every year in which citizens can do whatever they want, include commit murder, without fear of prosecution. (America’s leaders state that this period, known as the Annual Purge, allows for the expression of all the pent-up hostility that has otherwise largely vanished from civilized society.)

With the Purge imminent, successful high-end home-security salesman James (Hawke) prepares his family, including wife Mary (Lena Headey) and children Zoey (Adelaide Kane) and Charlie (Max Burkholder), for a complete lockdown of their house to protect themselves from any possibly murderous neighbours. But after Charlie feels bad for a bloody stranger (Edwin Hodge), who’s being chased by a mob, and lets him inside the family’s home, they incur the wrath of the mob’s leader (Rhys Wakefield), who threatens to break through their security and kill everyone in the family unless James hands over the stranger to them.

DeMonaco, who wrote the 2005 remake of Assault On Precinct 13 that starred Hawke, clearly wants The Purge to be a commentary on class divisions in America, imagining a world where the rich have safe, armoured homes while the poor are helpless to defend themselves during the Purge. (The film posits that, in this scenario, the rich would also hunt down the poor for sport, where reality would suggest that the exact opposite would be true, with the rich barricading themselves away from the angry commoners.)

The movie does have its fleeting instances, especially in the second half, where DeMonaco’s premise suggests the sort of nightmare that would be unleashed if humanity was granted permission to kill with impunity, letting loose society’s ugliest, basest tendencies. And he and cinematographer Jacques Jouffret manage to stage the terse showdown scenes between the family and the fearsome, mask-wearing mob inside the home with a little of the claustrophobic anxiety one usually associates with a Night Of The Living Dead.

The problem is that for the filmmaker’s thesis to have any power, one has to blindly disregard the story’s multiple logic issues. For instance, if anyone could kill anyone during this 12-hour period in the US, why would anyone stay indoors in the same domicile as other people? Why wouldn’t Americans simply flee the country during the Purge? And how could the mass carnage that occurs during the Purge not spill over into the rest of the year, sending the crime rate soaring due to retribution killings?

Because DeMonaco never answers these questions, as well as others, The Purge is a fantastical idea that has no mooring in relatable human behaviour. And as a consequence, the thematic issues at play — particularly whether James is “justified” in giving the stranger to the mob (who will most assuredly kill him) to save his family — have no dramatic heft.

The Purge’s cast do what they can to sell this wobbly premise, mostly by treating it as completely reasonable, but even here DeMonaco hasn’t sufficiently thought through his ideas. The stakes are conveniently raised throughout the movie thanks to different family members foolishly underestimating the gravity of their situation and lowering their guard. (If the Purge’s murder-is-legal rule is well-understood in this future society, then why do the characters continue to trust outsiders when, frankly, they shouldn’t even trust those closest to them?)

Hawke lends an emotional urgency to his scenes as he fights for his family’s survival, but James’ change-of-heart about this stranger feels unconvincing, DeMonaco not really having the nerve to let his scenario play out to its darkest extreme. And as for Wakefield, who plays the smiling, snooty leader of the mob, he oozes smarmy insolence, but it’s a one-note portrayal of a spoiled sociopath — indicative of the fact that, like so much else in the movie, the filmmaker has focused on superficial shock effect without delving too deeply into the implications of his speculative fiction.