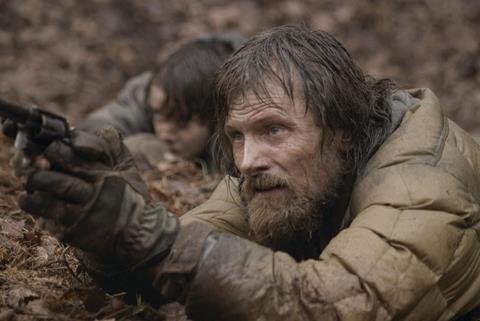 As heartbreaking on screen as it was on Cormac McCarthy’s Pulitzer-prize winning pages, The Road is an almost unbearably sad film, beautifully arranged and powerfully acted – a tribute to the array of talents involved. There is so much in this picture, from dread, horror, to suspense, bitterly moving love, extraordinary, Oscar-worthy art direction and a desperate lead performance from Viggo Mortensen which perfectly illustrates the wrenching fear of parental love. But its hopelessness will make The Road hard going for general audiences: critical and awards support are vital to its commercial success or failure and even still The Road will be a challenge.

A bleak Viggo Mortensen, his face etched like an El Greco painting, urgently and convincingly conveys his character’s love and desperation

Artistically, however, this film is a success, and anyone who sees it is unlikely to ever forget John Hillcoat’s (The Proposition) interpretation of McCarthy’s post-apocalyptic planet where “each day is greyer than the one before”. Production designer Chris Kennedy, using mainly Pennsylvania but also post-Katrina locations in Louisiana, presents a world which is slowly dying - Nick Cave’s sparse soundtrack punctuated by the crashes of trees falling to the ground, dead.

We don’t know the exact nature of the Apocalypse, just that The Man (Mortensen) and his wife (Theron) survived, and that she was pregnant. Perhaps the biggest departure from the book is in The Woman’s character; fleshed out here, but still with limited screen time, she doesn’t want to bring The Boy into this bleak world – later on, she is angry that they only have two bullets left in their gun. “They will rape me … and they will rape him. … They are going to rape us and kill us and eat us and you won’t face it. You’d rather wait for it to happen,” she tells The Man.

Rape and cannibalism are just two of the horrors of The Road, and some ten years the Man and the Boy are travelling it alone, going south to the sea. There is nothing on it – ruined landscapes, bodies of people who have killed themselves or been killed, danger, dirt, gray dust. There’s a terrifying sequence in a house with evil secrets under the floor; later on, another underground cavern yields up delights, but fear is always there.

Early on, the Man and Boy are shown encountering bandits travelling on a tank; initially, it conjures up memories of Mad Max but The Road dispenses with the cartoonishness of the former when one of the men looks at the boy and the horror they face daily becomes clear.

The Man has brought The Boy into the world, but it’s a terrible world with no hope and no future, only the evil that lies within men laid bare as the world dies. The Boy represents hope, but what hope is there? Of survival? Alone? The Road speaks to parents of their most unspeakable fears.

The Road speaks to parents of their most unspeakable fears

As The Boy, young Smit-McPhee looks uncannily like Charlize Theron which helps with initial establishing sequences. He is convincing in what must have been a tough, hard shoot for an 11-year-old – there’s a lot of rain in this film, and a lot of terror to convey. A bleak Viggo Mortensen, his face etched like an El Greco painting, urgently and convincingly conveys his character’s love and desperation, the actor’s physicality heightening the sense of reality – a sense that becomes overwhelming by the hopeless third act, despite the attempted relief of the final moments.

Screenplay
Joe Penhall, from the novel by Cormac McCarthy