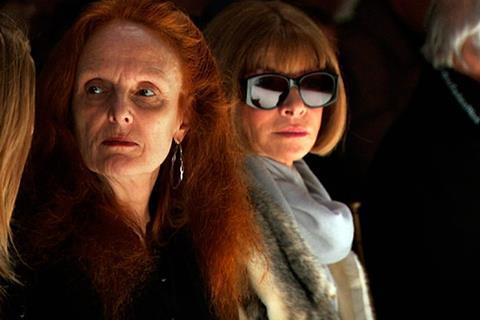 The September Issue is ‘the making of’ the September 2007 issue of Vogue magazine, which weighed four pounds and sold 13 million copies. The fly-on-the-wall camera shows the messy and chaotic way a fashion magazine is produced. The public’s appetite for fashion news seems insatiable, notwithstanding Vogue editor Anna Wintour’s contention at the film’s beginning that the general population resents the fashion world.

Just as intense in the US is interest in the inner workings of Vogue and in its controversial editor, which should be strong enough to get this Vogueumentary into theaters in North America, Europe, and Asia. Television demand for the film could be even stronger. And since Vogue is unlikely to give this access to a documentary any time soon, Cutler’s backstage doc could have a long shelf life. What’s more, The Devil Wore Prada also brought Wintour to the attention of mainstream audiences and primed it for this non-fiction portrait.

The first film that RJ Cutler produced was The War Room(1993), which tracked 1992 US presidential election through strategists James Carville and George Stephanopoulos. The new war room here is Vogue’s headquarters on Times Square.

Shot adroitly by Bob Richman, The September Issueshifts from runway to office to meetings to photo shoots, as Vogue assembles the seasonal issue that sells clothes worldwide, and sells the advertising that keep the magazine ahead of its competition. Wintour’s influence is so crucial that the chairman of Neiman Marcus pleads with her at a breakfast in Paris to pressure designers to deliver their goods on time for the stores.

Wintour here is complicated. She is blunt and decisive but through most of the film she takes her trademark dark glasses off in the office, and for interviews with Cutler. She discusses her father, a journalist, and reacts with sadness when her daughter Bee shows little desire to enter either journalism or fashion.

Besides a keen sense of style, Wintour’s gifts as an editor involve inspiring fear and loyalty among those who work for her and forging a strategy to groom celebrities to drive magazine’s sales. The numbers prove her right so far.

The doc finds drama in Vogue’s decision to put Sienna Miller on the cover. Miller won’t cut her unruly hair despite hints from the editors. The magazine must synthesize glamour nonetheless to create a ‘character.’ The result, a gamble, sells magazines and helps Miller.

The key battle in the film is between creative director Grace Coddington, who favours lyrical fantasy in fashion spreads, and Wintour, whose job requires building the bottom line. You don’t have to guess who wins, but it happens at the last minute - a reminder of fashion’s mercurial nature.

Despite Cutler’s access and his determination to get beneath Vogue’s glamour, his film lacks what would have been an illuminating interview with Wintour’s boss, Conde Nast chairman Si Newhouse. Nor do we hear from Vogue’s competitors or critics. The result is neither a valentine nor an expose.

Given the economy’s effect on magazines now, the Vogue staff may view the film with nostalgia. Their competitors will still view it with envy.