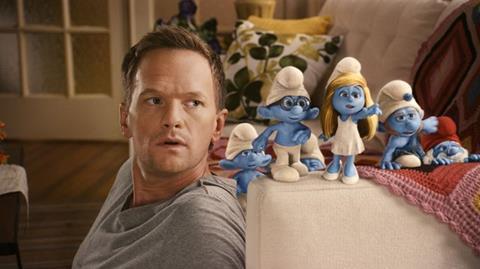 The Smurfs contains such moments of sweetness and heart that it’s all the more unfortunate that it’s otherwise a numbingly ordinary kids’ film. Based on Belgian artist Pierre “Peyo” Culliford’s comic book about a village of kindly, diminutive blue creatures, this combination of live-action and animation shows some willingness to not just go for the status quo – particularly in terms of its casting – but too often director Raja Gosnell stoops to deliver a movie that will pass muster with children without ever truly enchanting them.

Amidst the generic pratfalls and juvenile humour, though, there is a genuine sweetness lurking under the surface trying to claw its way into the light.

Opening domestically July 29 and expanding across the globe over August, this Sony Pictures Animation effort represents the summer’s final major family offering before Spy Kids: All The Time In The World arrives in the US next month. With not much for tykes in the marketplace, The Smurfs will enjoy some breathing room, hoping that parents will be willing to pay extra so their kids will see it in 3D. The question remains whether the Smurfs are enough of a cultural phenomenon to translate into stellar box office, but even then this harmless entertainment should have a decent shelf life on DVD and cable.

Enjoying a tranquil life in Smurf Village, the Smurfs, led by Papa Smurf (voiced by Jonathan Winters), are suddenly ambushed by their arch-nemesis Gargamel (Hank Azaria) and forced to escape into a magical portal that transports them to New York City. Befriending married couple Patrick and Grace (Neil Patrick Harris and Jayma Mays), the Smurfs must figure out a way to get home before Gargamel captures them.

Gosnell previously directed the Scooby-Doo films and Beverly Hills Chihuahua, so he has some experience with family films involving talking critters. But while the animation that brings the Smurfs to life is flawless, there’s otherwise an overriding mediocrity to the fish-out-of-water storyline that keeps the film from being as playful and breezy as it could be. With that said, Gosnell and his four screenwriters exhibit a clear affection for their tiny stars, capturing the Smurfs’ essential naïve adorableness without worrying too much about hipping them up for modern audiences. (The one exception is a painfully drawn-out montage in which Patrick and some of the Smurfs play Guitar Hero.)

Amidst the generic pratfalls and juvenile humour, though, there is a genuine sweetness lurking under the surface trying to claw its way into the light. Never winking at the audience, Harris convincingly plays an expectant father worried about the future who learns through the arrival of the Smurfs about the importance of taking care of others. And while it’s coated in a veneer of sappy sentimentality, the love story between Harris and Mays has a sincerity to it that gives the movie an emotional core its main heroes never quite develop.

The Smurf voice cast runs the gamut from effortlessly charming (Winters’ lovable old Papa) to tediously one-note (George Lopez as Grouchy Smurf). And despite having to do an inordinate amount of tiresome physical comedy, Azaria does have his moments as the megalomaniacal-yet-dim-witted wizard Gargamel. As is normally the case, the 3D work is solid in The Smurfs but hardly a game-changer. Would that the filmmakers had spent the extra time making their story stand out rather than the eye candy.