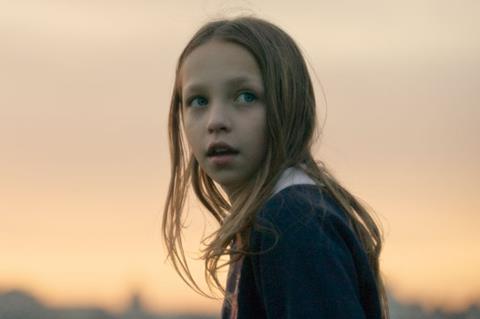 In The Unloved, actress Samantha Morton’s understated directorial debut, Lucy (Molly Windsor) is a young girl physically abused by her father, and taken from her parents.  This solemn film follows the near-mute child between the bumpy system of state care and the lonely quest to reconstruct her family.

Made for (and shown on) UK TV, The Unloved should easily find a berth at film festivals worldwide and possibly arthouse circles in English-speaking countries; the fact that its main character is silent through most of the film may also help in other, particularly European, countries, and Morton’s name will raise the film’s profile.

After a beating from her unstable father (Robert Carlyle) for losing money he gave her, Lucy, 11, is left with the clothes on her back, a Catholic school uniform that she wears for much of the film. Social service workers place her in a chaotic children’s home - a kind of prison that confines children for wrongs committed by others. There she meets angry 16-year-ld Lauren (Socha), who takes her shoplifting, and police arrest the pair.

Back at the home, Lucy witnesses Lauren being forced into sex by manager Ben (Craig Parkinson) and leaves again to seek out her now-contrite tearful dad in a pub. After a Christmas party at the home turns violent, she journeys to her mother (Susan Lynch), hoping to stay there.

This grim, discouraging portrait of Lucy and the system that fails children like her was assembled by Morton, herself a child of foster care, and written by Tony Grisoni (Red Riding, Fear and Loathing in Las Vegas). The lean script is an outline for Lucy’s emotional encounters with her parents, service workers, and other troubled children. Performances seem distilled from improvisations, with drama studio roughness still on the edges. The exception is pale blonde Windsor, who observes all the anguish with a quiet numbness.

The Unlovedechoes The 400 Blows, Francois Truffaut’s 1959 classic of a young boy’s rough childhood in Paris. Yet Windsor plays Lucy as prematurely stoic, rather than angry like Truffaut’s young hero, with a composed determination to return to at least one parent. Frustrated at every turn, she remains pokerfaced.

Lucy’s journey builds as a growing body of evidence, rather than a dramatic tale, yet that evidence is powerful. The solid supporting cast reminds you that guilt is shared by multiple parties.

Unlike many first films by actor/directors, which go for blunt tactility and raw gut emotion, The Unloved’s palette has a stark institutional chill to match Lucy’s detachment, evoking the austerity of Aki Kaurasmaki’s 2002 film about a lone beating victim, The Man Without a Past. DP Tom Townend’s camera is often inert as it observes the action, not moving for an entire scene, leaving the audience, like Lucy, more numb than angry.