The Vanquishing Of The Witch Baba Yaga 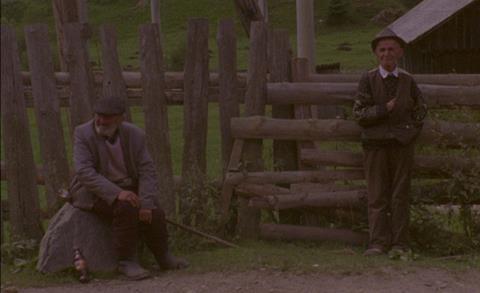 Documentarian Jessica Oreck (Beetle Queen Conquers Tokyo) details the gradual demystification of the witch Baba Yaga in this ambitious, ultimately successful essay about a deceptively complex historical process. According to Slavic legend, the demon so frightened impressionable children that, even as adults, they steered clear of her dark forest lair.

Its unusual and intoxicating blend of the artisanal and the nearly maniacally artful just might, with imaginative handling, turn it into a small cult item for lovers of both naturalism and edge in limited art-house and institutional venues.

Instead, they projected their collective fantasies upon it. Bloody warfare and ethnic conflict in the twentieth century necessitated a revaluation of the myth, so that farmers and city dwellers alike could overcome the ingrained phobia and take refuge in the woods.

The Vanquishing will find an audience on the festival circuit, on specialised television outlets, and in other ancillary markets. Its unusual and intoxicating blend of the artisanal and the nearly maniacally artful just might, with imaginative handling, turn it into a small cult item for lovers of both naturalism and edge in limited art-house and institutional venues.

Scheduled for a world premiere at New York’s prestigious New Directors/New Films in late March, the film’s producers agreed at the last minute to debut at the tail end of February at the recent all-doc True/False Festival in Columbia, Missouri, the film scene’s latest media magnet.

Accessibility is clearly a priority for this labour-intensive production, in spite of the arguably esoteric subject matter and broad range of media and techniques, which include hand-painted animation, contemporary 16mm and archival footage, heady voiceover, and an eclectic music track that runs the gamut from abstract to regional folk.

Oreck’s original plan was to make a film in Romania and Hungary centring on mushrooms. As her focus expanded into a broader paradigm about man and the natural world—that he should collaborate with, rather than try to control it—she added Poland, Ukraine, and western Russia to her locations. Many shots are impressionistic—scenes from nature, from villages where fossilized customs are transmitted, and from contemporary urban settings in their multiple manifestations.

Context confers meaning. It may emerge from the musings of the authoritative narrator, such as his analysis of the damage man has inflicted upon himself by abandoning the cycles of nature and “hammering time flat;” or it may emanate from a plot point in the centuries-old story we see on excellent animated panels and hear from a woman’s soft motherly voice.

The tale, about displaced siblings Ivan and Alona who have hidden in the forest but must outwit Baba Yaga to save themselves after she holds them captive, runs the length of the film, its narrative segments intercut with contemporary shots bearing some visual or functional connection. Mostly the strategy works, but occasionally Oreck, who is her own editor, is too literal.

She explores the role of memory in the way fairy tales develop and become “stories retold,” and by extension, how man internalises customs and rituals. The question remains: Are those who live most in harmony with nature not the same rural residents who are most slavish to unquestioned convention?

Detachment from the land results in disorientation and fear, the narrator tells us. To assuage our terror of the unknown, we build fences and bunkers and objectify it in multiple ways—but what do we do with that potent bit of “the wild” that exists inside us? The Vanquishing does not talk at you, it talks to you, even with you.  The concluding commentary and visuals take the film back to childhood. The ending is hopeful, its sweetness a welcome relief.

The Vanquishing Of The Witch Baba Yaga is not to be confused with Corrado Farina’s Italian horror-chic Baba Yaga (1973), aka Kiss Me, Kill Me, aka The Devil Witch, inspired by the legend, in which Carroll Baker portrays a lesbian witch holding a beautiful fashion photographer against her will in a mansion perfect for torture.