‘There is still capital flowing into domestic distribution'

In the second of two round-table debates on the new realities in Hollywood, Jeremy Kay speaks to executives about pre-sales, banks and the rise of international power hubs 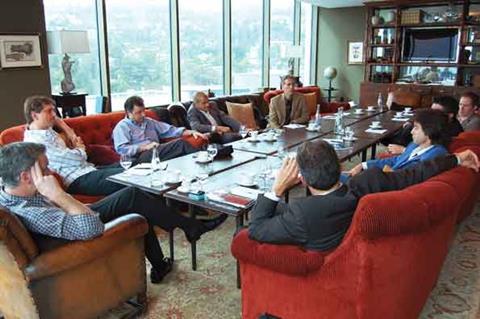 Jonathan Deckter is president of sales and distribution at IM Global

What do international buyers want?

Jonathan Deckter Buyers want films that are well crafted, fully developed,branded when applicable and most importantly targeted to a specific demographic. This past Cannes, we were tremendously successful in selling Safe, starring Jason Statham and directed by Boaz Yakin. Additionally, when word got out that we would be involved in a reboot of Judge Dredd, our office was flooded. It’s high-concept, branded entertainment with high-level film-makers done for a smart budget. Once we’re cast and we have our US distribution partner in place, we’ll launch this project to the marketplace and I’m confident we’ll sell it through.

Dan Steinman The major territories outside the United States for some time now have made it known the films that work best there are movie-star-driven genre movies: action, thriller and romantic comedy. Among the movies CAA has recently put together with independent financing are Machine Gun Preacher, an action movie directed by Marc Forster and starring Gerard Butler; Larry Crowne, a romantic comedy written and directed by Tom Hanks and starring Hanks and Julia Roberts; and Safe, which Jonathan just referred to. All these movies fit the criteria that our international buyers [desire] and were made for $20m-$30m with non-studio money. The lesson is that for us the independent sector is healthier than it’s ever been, and the reason is that we have recognised and capitalised on its evolution rather than fight it.

James Stern As the world changes, the bullseye becomes narrower and narrower. Could we make An Education today, for example, in the way we did several years ago? It has Carey Mulligan and Alfred Molina and a wonderful cast of actors, but not all are ‘name’ actors to satisfy foreign sales. I don’t know that we could make that movie today.

What about the rise of international power hubs?

Graham Taylor StudioCanal is one of the most exciting companies globally and the importance of these international studios is having an impact on what we do. Box office was 35%:65% in favour of North America 10 years ago and now these numbers are reversed. So given the importance of all these projects being developed and produced internationally, one has to look at the financing risk on a worldwide basis and not just on a pre-sales model, but with equity partners worldwide. In terms of the domestic distributors, I look at Graham King and Bob Berney, I look at Newmarket, I look at ATO Gotham. There are either new or revamped companies coming into this space with smart operators.

Tim O’Hair It’s important to have an audience in mind when making a movie ― any movie. The independent and foreign distributors are looking for quality and some degree of commerciality, and they’re waiting longer to license titles. Many foreign buyers are stepping up their English-language production efforts and are getting involved earlier in the process. What international elements will satisfy/scare the banks and what steps are people taking to get to know the marketplace more intimately?

Charles Heaphy There are approximately eight active US-based lenders/banks lending in the single-picture space now, with an additional three or four in Canada and Europe/Asia. More deals are coming across the desks of my colleagues and myself. Before I sign off on a loan I want to see reputable producers on a project, reputable sales agents, and at least two major foreign territory sales should be in place. Banks are willing to entertain gap loans but the gap coverage needs to be higher than the old rule of thumb, which was two times coverage of the gap. I’d say we avoid first-time directors and avoid lending against territories where the national economy is overly stressed, such as Greece and Spain.

Jonathan Deckter We’re extremely diligent about knowing our marketplace and knowing our clients’ wants and needs. It’s our job as a foreign sales company to know in real time the state of an ever-evolving marketplace. Our sales team communicates with our clients on a daily basis in order to find out how best to help supply their needs. Nothing can replace the time you spend in each marketplace, which is why we travel to see our clients, to visit their cinemas and retail shops, see the outdoor advertising and truly gain first-hand market knowledge. We continue to work with our buyers not only through the theatrical release, but the DVD and ancillary releases as well. What are some of the challenges for the US marketplace and what might lie in store?

Tim O’Hair The independent film space has expanded as the studios have focused on bigger tentpole titles ― we see larger independents being put together. Same with this distribution space ― there is clearly an opportunity as we’re seeing many companies trying to cash in. It’s still possible for an independent release to platform: look at City Island [released by Anchor Bay] which has taken in $6.5m on less than 300 screens over four-plus months.

Jonathan Fischer The Relativity-Netflix deal can’t help but be a good thing for indie films. Ideally, this signals that Netflix and/or other companies will start coming in and pursuing the equivalent of pay-TV rights. This revenue stream is a key window and one of the main distinguishing factors between domestic distribution choices. However, even if this is just a one-off deal and not a new trend, Relativity is now in a position to launch its own distribution infrastructure, and having more distributors with slots is always welcome for producers.

Charles Heaphy Just like any cyclical business, banks will leave an industry segment when things get rough and take their lumps in the form of charged-off loans. That has happened to virtually every bank operating in the film space over the last two years. As time passes, [some of] the banks that abandoned the space will look to slowly get back into it. We see that starting to happen now. Also, banks that are completely new to the space will enter from time to time, such as SunTrust Bank.

Graham Taylor It’s more challenging to leverage equity as it relates to the debt market and banks, and often films come together quickly when there isn’t time to make sales and you don’t have the time to close deals with banks, so I have seen a number of movies come together on an all-cash basis.

Dan Steinman There’s been a lot of media focus during the past year on shrinking studio slates and the exit from the marketplace of a number of distributors focused on independent movies. But we are also seeing quite a bit of early-stage development activity by new entrants into domestic distribution. And at least equally important, the domestic p&a market looks more robust than we’ve seen in years. So there’s still capital flowing into domestic distribution, but it is likelier than ever to come from non-studio players and is therefore making our role more complex and interesting.

James Stern In terms of new approaches to marketing your movie, you would think that as the world gets more connected, word of mouth is more connective. So if people talk about your movie on a social network, that’s a way to get more people into a theatre and seems quite affordable. The problem is that kind of advertising hasn’t led people to go and see movies ― it tends to follow after a movie is seen by a lot of people and there’s chatter about it, but it doesn’t tend to promote independent films that are yet to be discovered.

Jonathan Fischer Clearly, library values have suffered significant declines over the last two to three years. I think this is the result of the decline in the DVD market and uncertainty as to what replaces this lost revenue. I’m confident something will replace some of the lost revenue, whether it be Blu-ray, VoD or other forms of digital distribution. But I don’t think anyone knows now what order of magnitude these new revenue streams will generate, and in the context of such uncertainty, people aren’t willing to assign much if any library value to these nascent revenue streams.