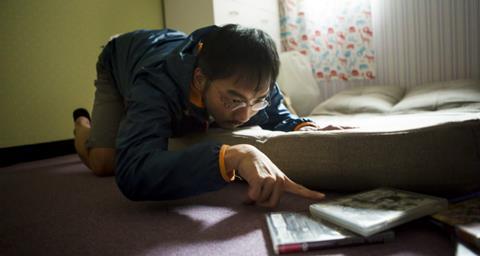 Three of Asia’s most acclaimed actors – Chang Chen, Jung Woo-sung and Francis Tg - step behind the camera with this watchable package of three short films, telling the very varied stories of three men having epiphanies of different kinds. Impressively made and bleakly striking, they are fine debut films and likely to feature further on the festival circuit, whether as part of this package or as individual short films.

The triptych, produced by Fushan Features and the Hong Kong International Film Festival Society, premiere at the HKIFF where they are likely to be met with a warm response.

The film opens with Francis Ng’s The Tangerine, which follows a desperate criminal trying to live off the streets after contemplating suicide while running through a forest. Stumbling through the city streets he steals food, but is bemused to be handed tangerines by a sweet-natured girl running a fruit stand. He is also shown kindness by an elderly man living on the streets who shares food and drink with him.

But when the old man is killed by a gang (clearly no ‘charmed life’ for him) the shattered man sees no hope in life, but after being offered tangerines again by the same girl he decides to offer the only kindness – telling her that there is a reward for him if she calls the police.

Second up is Jung Woo-sung’s The Killer Behind The Old Man (perhaps the most stylish and best sustained of the three) about a hitman hired to assassinate an elderly man, but who finds himself transfixed by the man’s slow-moving and ordered life and who hesitates to carry through with his mission as he observes the man in the gym, walking (in a scene reminiscent of Tsai Ming-liang’s Walker) slowly down the street or buying flowers.

The Jaguar-driving killer is hassled to complete the hit, eventually quietly entering the man’s home but again hesitating to carry through with his mission when he hears the old man crying behind a closed door. The final scene sees the assassin parking his car and walking – as slowly as his target did – up a foggy roadway.

The final film, Chang Chen’s Inchworm, tracks the downward spiral of a man who loses his job and proceeds to spend all of his time playing video games. Ignoring his wife and young daughter he seeks solace in a virtual world, only finally emerging from his depression when he is forced to spend time with his daughter and finally starts to realise what he has been missing with his family life.