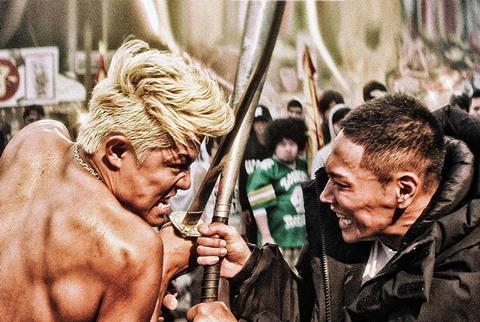 Tokyo Tribe is a shot of adrenaline that only offers a sporadic boost of energy. Ambitiously trying to mix the hip-hop musical with the gangland action epic, the latest from gonzo filmmaker Sion Sono seems destined for cult status like so many movies in his oeuvre, but this probably won’t be the place where the uninitiated decide to jump onto his bandwagon. Sexy, tawdry, gaudy, bizarre and tiresome, Tokyo Tribe is dispiriting proof that sometimes a hyperactive filmmaking style can lead to tedium more than euphoria.

Tokyo Tribe soon becomes an experience in which aggressive, ho-hum rap tries to fill the void of a story that’s not particularly engaging.

Screening as part of the Toronto Film Festival’s Midnight Madness section, where Sono won the audience prize last year for Why Don’t You Play in Hell?, Tokyo Tribe will play best to his small but loyal tribe of genre buffs and extreme-cinema aficionados. The heavy use of rap music in place of dialogue could help broaden the movie’s appeal, and those familiar with the source material, Santa Inoue’s early-1990s manga, may also check in to see what Sono has brought to the proceedings. But certainly mainstream acceptance won’t be happening any time soon — which, one assumes, is perfectly fine with this iconoclastic filmmaker.

Set over the course of one eventful night and the following morning, Tokyo Tribe imagines a grim future Japan where earthquakes are rampant and the land is divided up between fierce hip-hop gangs. In this amoral land, the most terrifying warlord is Buppa (Riki Takeuchi), who with his deadly lieutenant Merra (Ryohei Suzuki) are in search of their high priest’s missing virgin daughter. Their quest will put them in opposition to Kai (Young Dais), a relatively peaceful young man who befriends Sunmi (Nana Seino), an innocent girl who is at risk of falling into Tokyo’s large sex-worker industry.

Sono’s previous films (such as Love Exposure) have freely moved from genre to genre and tone to tone, risking campiness and bad taste in order to achieve the director’s hyper-vivid emotional portraits. By comparison, Tokyo Tribe mostly offers overblown spectacle, and Sono and cinematographer Daisuke Soma create several bravura tracking shots in which we see the breadth of the chaos and energy of their nightmarish future Tokyo. Additionally, Sono’s gambit to have the characters often rap what they’re thinking — there’s even a rapping onscreen narrator (Shota Sometani) who pops in from time to time — gives the movie the bracing freedom of an old-school musical or opera.

Unfortunately, what starts off as a bold canvas quickly becomes dull and garish. The unremittingly juvenile and misogynistic rhymes of the characters’ gangster-rap lyrics leave us trapped in a world in which everyone is just different shades of unappealing. (Along the same lines, the movie’s portrayal of women is retrograde: They’re mostly seen as sluts and whores.)

Plus, the music doesn’t have enough catchy moments to engage the ear, and so Tokyo Tribe soon becomes an experience in which aggressive, ho-hum rap tries to fill the void of a story that’s not particularly engaging. In truth, the introduction of a missing daughter happens relatively late in the film, which beforehand is devoted mostly to the warlord’s grotesque evil — he enjoys cannibalism and endless sexual gratification. Likewise, Kai doesn’t necessarily stand out among the throngs of characters we meet. (The many different tribes take up too much screen time, with none of them leaving much of an impression.)

Among the cast, Suzuki is the most vivid, turning Merra into a preening psychopath who’s comically obsessed with whether any of his enemies or associates has a bigger penis than he does. (He’s pretty confident his is the largest, but he just wants to make sure.) As for Young Dais, he’s made his name as a Japanese hip-hop star, but he doesn’t display a ton of charisma as the meekly heroic Kai. Between the booming soundtrack and Yuji Hayashida’s colourful, consciously tacky production design — complete with a cheeky nod to A Clockwork Orange — Tokyo Tribe cares more about the minute-to-minute rush of visuals and sounds than any specific character. In such an environment, an actor like Takeuchi can dominate because of his weathered face and amusingly shameless overacting. But like much of Tokyo Tribe, he wears out his welcome much too quickly.

Screenplay: Sion Sono, based on the manga Tokyo Tribe2 by Santa Inoue