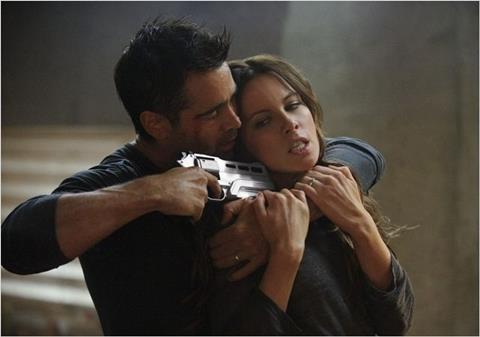 A muscular entertainment but nothing more, Total Recall delivers plenty of action set against an engagingly dystopian future, but this remake of the 1990 Arnold Schwarzenegger vehicle is so invested in its hardware that it doesn’t do nearly enough to explore the thought-provoking ideas at its centre. For a film about the dangers inherent in trying to escape reality, this late-summer entry is a disappointingly forgettable diversion.

Even if there isn’t much to engage the soul in Total Recall, Wiseman keeps things moving along decently well thanks to a series of propulsive action sequences.

Opening August 3 in North America, Total Recall looks to be a mid-range performer, hoping to capitalize on audience familiarity with Colin Farrell, Kate Beckinsale and Jessica Biel. The original film was the seventh-highest domestic grosser of its year, but a comparable feat for this lower-profile remake seems unlikely. Nonetheless, DVD and cable should prove welcoming.

In a future in which much of Earth’s population has been decimated by nuclear war, Douglas Quaid (Farrell) is a working-class guy who loves his wife Lori (Kate Beckinsale) but wishes his life were more meaningful. A possible solution presents itself in the form of Rekall, a company that implants realistic memories within their customers, allowing them to be superstars or athletes of whatever fantasy version of themselves that they desire. But just as Quaid prepares for the procedure, which will allow him to become a spy, he is ambushed by cops who believe he’s part of a terrorist organization.

Based on sci-fi writer Philip K. Dick’s short story We Can Remember It For You Wholesale, both Total Recall films have found their narrative engine in questioning whether Quaid’s life-or-death situation is real or part of the Rekall program. Unfortunately, in both movies the full implications of such a possibility aren’t deeply investigated. (Mostly, it sets the action in motion and then provides a few twists along the way.) In the case of this remake, that lack of imagination is particularly noticeable, with Wiseman (Live Free Or Die Hard) showing more care in laying out his bleak future society and action set pieces than trying to unearth the existential anxiety that his film’s storyline provokes.

It’s a missed opportunity since the world of Total Recall is so despairing and Quaid’s life so drab that one could understand why the character might actually prefer to believe that he’s really Hauser, a member of the resistance trying to root out tyranny in the evil central government. But instead of exploring the nature of wish fulfilment or the seductiveness of denial, this new Total Recall is largely a brawny, sci-fi actioner propelled along by its next elaborate sequence.

This isn’t disastrous since production designer Patrick Tatopoulos has created a rich, evocative future world that, probably intentionally, borrows from other films inspired by Dick’s work. (You can see shades of Blade Runner’s rainy metropolis and Asian-themed décor, not to mention Minority Report’s sleek, desaturated interiors.) Whether it’s “The Fall”— a subway-like transportation device that takes people from one side of the planet to the other by going through Earth’s core — or the consistently clever small touches, such as the fact that humans have phones embedded in their hands, Total Recall always offers something to entrance the eye.

Granted, the film’s futuristic look also borrows from Star Wars, The Fifth Element, The Matrix, Children Of Men and others, but while there is some familiarity in the design, it adds up to a despairing worldview that proves more compelling than Quaid’s plight to unravel the mystery of his identity.

In recent years, Farrell has done some of his best work as haunted, humbled men in Cassandra’s Dream and In Bruges, so the chance to play a regular guy who doesn’t know who he is should have proved a good fit. Unfortunately, after initially revealing Quaid’s disillusionment, Farrell soon transitions into bland action-hero mode, convincingly punching and shooting everything in sight but not really eliciting much sympathy. After Schwarzenegger’s over-the-top performance in the gorier, R-rated original, one can understand why this more sombre PG-13 remake decided to go in a darker, realer, more stripped-down direction. Still, Farrell’s charm and vulnerability seem to have been lost in the process.

This streamlined strategy applies to most of the rest of the cast as well. Bryan Cranston’s villain and Jessica Biel’s tough-as-nails freedom fighter are chiselled in stone, offering little warmth or spark. The one performer who lends a little spirit to the proceedings is Beckinsale, who goes from Quaid’s loving, docile wife to a dangerous, nimble assassin once he learns the truth about his past. Beckinsale is Wiseman’s wife — she’s appeared in his Underworld films — and she alone conveys a sly, almost camp streak that helps undercut the grim solemnity elsewhere.

Even if there isn’t much to engage the soul in Total Recall, Wiseman keeps things moving along decently well thanks to a series of propulsive action sequences, including a hover-car chase and a showdown that involves jumping between floating elevators. As he did with Live Free Or Die Hard, Wiseman shows that he prefers action scenes that wilfully defy the rules of physics as it concerns the human body.

Farrell, Beckinsale and Biel jump distances and take punches no regular person could manage, but the swiftness of his delivery is such that there’s a smooth flow to his sequences. Early on, Quaid is warned that if Rekall isn’t done properly, it can scramble the customer’s brains. Such a state is the best way to experience this new Total Recall: It’s a potentially ingenious idea that turns out to be rather mindless.

Screenplay: Kurt Wimmer and Mark Bomback, screen story by Ronald Shusett & Dan O’Bannon and Jon Povill and Kurt Wimmer, inspired by the Short Story “We Can Remember It For You Wholesale” by Philip K. Dick