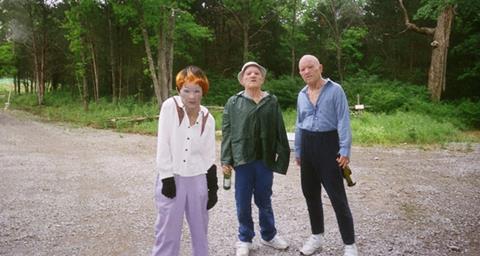 “Enfant terrible” Korine (Gummo, Julien Donkey-Boy) morphed into an “adult acceptable” with Mister Lonely (2007), a slick production about celebrity imitators that lacked the transgressive — to many viewers repellent — quality of his earlier films. With Trash Humpers, Korine is back on his unique irreverent track.

Other characters make appearances: a man wearing a shirt with the design of the Confederate flag who does a soft-shoe (Korine himself); three heavy-set, topless prostitutes whom the men spank; and a few other oddities. As much a reflection on art, society, and the darker recesses of the unconscious as a film per se, Trash Humpers has slim commercial prospects, except perhaps in ancillary for cult items.

As gratuitously crass as this might seem, Korine puts on the screen images which reveal how people create fragments of reality in their minds, when asleep, for example, or when tired, or when daydreaming. The film presents free association in all its coarseness as a fact of life. The child-like characters (babies are a recurring motif) could just as well exist in our imagination. This is true Surrealism, the juxtaposition of disparate entities for an effect stronger than the sum of their parts. Marcel Duchamp would salute Korine.

The director shoots on video, with a grainy effect and a camera that sometimes roams away from the subject, including markings and lines that are usually excised from a finished work.

Korine’s characters function outside of what is considered a civilized social order. They are anti-bourgeois, but their world is a self-contained universe that exists parallel to the norm. “Straight” people are not up on the screen. As bizarre as his vision might be, it puts forward an alternative society whose members have the right to live as they see fit. He should be applauded for digging into psychic terrain where few dare to venture.