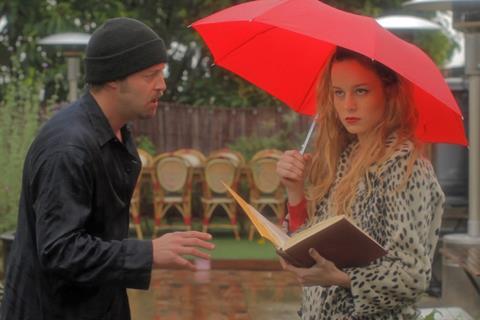 Treatment follows an ambitious would-be director (Joshua Leonard) into a “luxury wellness center” to recruit an addicted star into the cast of his new film. Shot fast and cheap, the comedy reminds you that Hollywood insincerity is the gift that keeps on giving. So is Mumblecore blandness.

This comedy aims at a new twist in the fool’s folly, indie-style.

Setting a story in the world of independent filmmaking inevitably limits a film’s reach beyond festivals. Treatment will also be limited by its sub-guerilla production values, which won’t be a novelty to indie-philes who met Leonard in The Blair Witch Project or Humpday.

Treatment will still be late-night viewing for the Joshua Leonard’s die-hard indie and stoner fans, yet international exposure beyond North America will be limited to the festival circuit.

This comedy aims at a new twist in the fool’s folly, indie-style. Director Leonard and his rich pudgy producer/partner Nelson face the age-old dilemma – how do losers with no money finance a film?  Their “eureka” comes when action star Gregg D (Ross Partridge) urinates on Leonard in a bar toilet. Soon they read that the A-list drunk is in a posh rehab center, Wingspan. Leonard joins him there for a week to pitch the project, thanks to $10,000 that Nelson withdraws from a trust fund managed by Nelson’s resentful brother.

In rehab setting, Nelson and Schardt field an ensemble of pampered addicts and the  New Age “helping professionals” who mostly feed off them. It’s a situation that’s taken largely off the rack, but some clever dialogue and quirky performances set it apart from boilerplate Mumblecore.

Yet not far enough. The directors’ exploration of this readymade target settles into weirdness and deadpan reaction shots. Seen through cinematographer Benjamin Kazulke’s Canon 7D, chic rehab never felt so cheap or depressing. The woozy look creates a “luxury wellness facility” that would lead the most sober person to intoxication.

In a comedy, it helps to know what you’re mocking. The film’s best dialogue comes in quarrels between Leonard and Nelson over films and money. The bromance’s pace slackens in all but a few therapy scenes.

As Gregg D, the icon on whom Leonard wants to peddle “Golden Handcuffs,” a drama about an investment banker hiding out in prison until the financial crisis blows over, Ross Partridge gets the dumb vanity right. Brie Larson maneuvers teasingly as a teen rehab frequent flyer with ice in her veins, dealing drugs to the “clients.”

Some details do make Treatment fun, such as aphorisms in text by Wingspan’s founder that punctuate scenes.  One reads: “You say ‘narcissist’; I say ‘carbon-based life form’.”

Nelson and Schardt show celebrity drug treatment to be almost as expensive a practice as the making of a cheap independent film.  The also remind us that places like Wingspan are probably a better investment.