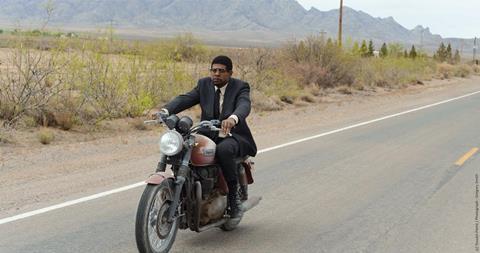 In Two Men In Town, Rachid Bouchareb takes Jose Giovanni’s 1973 French film to a small town in New Mexico, where Forest Whitaker, in a role played originally by Alain Delon, is an ex-con trying to go straight but dogged by an Inspector Javert-like figure played by Harvey Keitel.

While this puzzling remake can sometimes shudder tonally, Forest Whitaker plays smooth and true throughout.

It’s an awkward graft in which none of the players looks particularly comfortable, despite a typically powerful central performance from Whitaker which should, along with Bouchareb’s well-defined arthouse pedigree (Indigenes, London River), command attention although mainstream play will prove a challenge for this stilted work.

Working with writers Olivier Lorelle and Yasmina Khadra, Bouchareb has upped the dramatic stakes from Giovanni’s film- originally a bank robber, the central character is now a violent cop killer. He has, moreover, converted to Islam during his 18-year stretch, leading to expectations that Bouchareb may be using Two Men In Town’s schematic, familiar premise to examine small-town America’s relationship with the Muslim faith. The New Mexico milieu, with its vigilante border patrols, also promises a rich dramatic seam.

It’s not entirely clear what Bouchareb is shooting for with Two Men In Town, however; is it a latter-day Western, an archly-iconic morality tale? Some of the film veers towards the anachronistic - Whitaker’s costumes, for example. His character, William Garnett, is the great outsider in a land that doesn’t much like the outsider (as illustrated by the occasional dead migrant who has lost the battle with this elegically-shot harsh terrain).

Certainly, Brenda Blethyn’s appearance as an overweight, plain-talking parole officer  (the Jean Gabin role) is initially incongruous (she cleans her gun to the sounds of L’Absynthe, as performed by Barbara). Her Agent Smith is charged with helping Garnett take his faltering first steps back into society, and the British actress soon beds down to make the most of the part. Garnett has been a criminal since the age of 11, and this is his fifth prison stretch, for murdering Sheriff Agati’s (Keitel) deputy.

Agati won’t let go, although Keitel never seems fully convinced by his mission, and neither will Willie’s former partner in cross-border crime Terence (Luis Guzman). And despite his desperate attempts at religion, Garnett always seems too fragile for even himself, never mind his adversaries. Dressed like a Nation of Islam follower in his suit, tie and Malcolm X glasses as he drives across the desert in his bashed-up motorbike, Garnett is a peculiar sort of native child with not much in the way of backstory to call home. As if to underline this, Ellen Burstyn turns up as his adoptive mother in a puzzling if affecting cameo.

Meanwhile his romance with beautiful, innocent Mexican bank teller Teresa (Heredia), rapidly leads to them cohabiting and although their relationship ups the dramatic stakes, it never feels like anything but a dramatic device.

While French-born Bouchareb shoots New Mexico with a sympathetic eye, there’s an lack of ease to this production that can lend a tension to the central plight of Whitaker’s doomed Garrett but also fatally hinder the film’s already-erratic flow. Stripped down to its basic element, Two Men In Town is a testament to One Man’s performance (ably supported by Blethyn). While this puzzling remake can sometimes shudder tonally, Forest Whitaker plays smooth and true throughout.