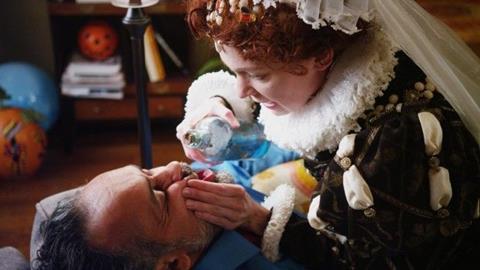 When two couples are having their annual Halloween night get-together their decision to sample a bright blue Peruvian drink leads to laughs and revelations as they find themselves having to tell the truth.

Vino Veritas – the Latin proverb that translates simply to “in wine, in truth” – is a smartly and slickly made indie drama, cleverly adapted by playwright David MacGregor from his own production and blessed with four fine performances, especially from Carrie Preston, who has gained acclaim from her role in television’s The Good Wife, in which she plays quirky genius attorney Elsbeth Tascioni.

The film, which has played at a selection of mainly US film festivals, is a nicely structured production that belies its stage-bound origins thanks to watchable performances, astute use of costumes (it is set on Halloween after all) and a nicely balanced screenplay. It may have a rather low-key opening and a slight climax, but at the core Vino Veritas is quite watchable.

In truth the bright blue concoction that is drunk barely qualifies as wine (though there is a nice gag in the film about Nebraska becoming the new Napa Valley), but the notion of a ‘truth drink’ naturally serves up plenty of dramatic options.

The drink is a souvenir of a recent trip by genial Phil (Brian Hutchinson) and his more free-spirited wife Lauren (Heather Raffo). She is unhappy with their marriage, and brings out the bottle when their next-door neighbors, doctor Ridley (Bernard White) and his stay-at-home wife, Claire (Preston), come over for a drink before an annual party.

Claire is dressed as Queen Elizabeth; Ridley stays in his doctor’s jacket with stethoscope, claiming he’s on call; Phil dresses as a cowboy and Lauren a saloon girl.

The conversations start amusingly as they pass time taking each other’s photographs in the studio Phil and Lauren share as they debate what is the best movie they have seen (Phil and Claire eventually agree on Babe: Pig In The City) before heading into more personal territory with accusations of affairs; debates about children and the state of their marriages.

Director Sarah Knight keeps Vino Veritas moving nicely, and makes good use of her interiors that help belie the film’s stagey origins. The performances are all on the mark and while there are times when the dialogue falters, this is a smartly made film and an easy one to watch.