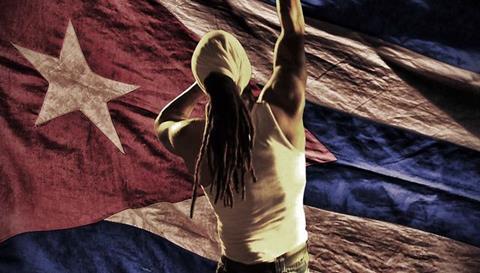 A powerful, charming and often appropriately provocative documentary, Jesse Acevedo’s Viva Cuba Libre: Rap Is War has the drive and verve to appeal to music-orientated distributors, and deserves to find further festival slots around the world. The film had its premiere at the Miami International Film Festival where it naturally enough found a welcoming audience, but it also fits nicely into the current theme of music-as-protest films.

The rap music is – by its nature – raw, pounding, youthful, angry and aggressive, but with politics as well as social comment as part of the lyrics it strikes a chord with the youth of Havana.

The film’s focus is underground Cuban rap duo Los Aldeanos – the heavily muscled and tattooed (but also thoughtful and gently-spoken) pairing of Bian and Aldo – who are banned in the country, play secret gigs and give away their music on the streets of Havana.  Filming guerilla-style, Acevedo and his unnamed cameraman (who still lives in Cuba and cannot be identified for fear of reprisal) have crafted a nicely judged documentary that never tries to over-complicate the subject, but presents a story with thoughtful intensity.

The film follows Bian and Aldo as they hand out CDs, perform at concerts (often they only get to perform a few tracks before being ushered off stage for fear of government or police intervention), write their music in their modest homes and travel by bus to far-flung concerts, but also sets this alongside the moving story of the teenage Cruz brothers, who were beaten and arrested by police outside at their home in a small town outside Havana for simply listening to Los Aldeanos.

The rap music is – by its nature – raw, pounding, youthful, angry and aggressive, but with politics as well as social comment as part of the lyrics it strikes a chord with the youth of Havana, and while they are enthusiastic at the concerts the fans are also way when being interviewed on the streets for fear of being overheard and reported. Bian and Aldo are often mobbed on the streets by adoring supporters, but also fear being picked up by the police.

Long-time friends Bian Óscar Rodríguez Gala (El B) and Aldo Roberto Rodríguez Baquero (El Aldeano) are a genial pairing. Family loving – with Aldo’s feisty elderly  great Aunt Mina not approving of the lyrics – and determined to keep on recording and giving out their music for free, they may appear tough but they are warm and thoughtful characters, with the final section of the film detailing Aldo preparing for the arrival of his first child.

The most moving strand running through the film is the series of interviews with the stoical mother of the Cruz brothers, who gives a series of secret interviews with Acevedo and also meets with Aldo and Bian. Despite what has happened to her sons she supports Los Aldeanos and is moved when they write a song about the Cruz family and the situation. When the film shot the brothers were being held in prison, though the final coda of the film states that they were sentenced to five years in prison for listening to the music.