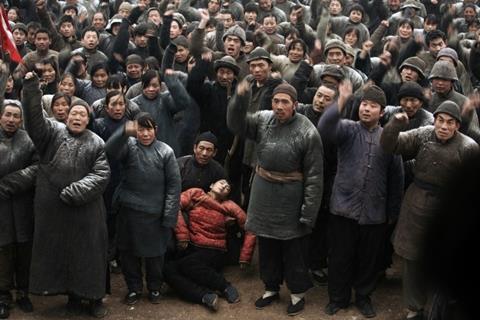 One thing any three-hour film needs to keep its audience in the seats is emotional appeal. And that is the one feature most sorely missing in Wang Quanan’s picturesque saga, adapted from Chen Zhongshi’s novel which had been banned by the Chinese censors for years for its overt sexual contents.

Visually, the landscapes are quite spectacular, with a dark, foreboding mood in the air.

White Deer Plain(Bai Lu Yuan) is a long film - though 10 minutes shorter than the noted in the Berlin catalogue - and the confrontations between two predominant families in a village are still at its heart, but despite all the conflicts, the violence, the numerous beatings its characters are submitted to and the political upheavals in the background, it is delivered with such academic ostentatiousness, that non-Chinese viewers will probably never feel part of it.  There’s plenty of sex as well, probably explicit by Beijing standards but still pretty tame in Western terms.

The concept itself is familiar: take one small place and make it the metaphor for an entire nation. The place, in this case, is White Deer Plain, a peaceful village in the province of Shaanxi, in Central China. The period covered by the plot runs from 1910 and the end of Imperial China to 1938 and the Japanese invasion.

he two most important families in the village are the Bai, whose head, Bai Jiao Xuan (Zhang Feng Yi) represents the old time traditions and rules, as they are recited in chorus by the entire village in one of the film’s earlier sequences, and the Lu, who provide the secular arm, with Lu Zilin (Wu Gang) serving, for most of the film, as the village mayor.

Their kids, Bai Xiao Wen (Zheng Tai Shen) and Lu  Zhao Peng (Guo Tao), with Heiwa (Duan Yihong), the son of the faithful Bai family servant, Lu San (Lu Wei) will be the leading protagonists of the entire piece (the actors’ names in brackets refer only to the adult performers who enter the film after the 1920 period).

Taking the audience through several time stations, the plot observes, from the peasants’ point of view, the political changes which took place in the country. To begin with, the introduction of a republic and a president that are even greedier and more corrupt than the Imperial court used to be; then the fall of the last throes of feudalism, threatened by the growing sympathy for the communist party; the shaky alliances between Mao and Chang Kai-shek and the perennial clash of every new regime with the past and its practices, a preponderant factor all through that period.

Traditions remains all powerful even at a late stage with the peasants demanding to relieve the famine in the village by building a temple to a sinful woman who had been killed and whose spirit, they believe, is haunting the place. As for social injustice – to quote one of the characters in the film - it will never disappear as long as there will be peasants to discriminate against.

Sex is added to the equation when Weiha, working as a hired harvester for an old, decrepit, impotent lord, goes to bed with one of his wives, Xiao’e (the stunningly beautiful Zhang Yu Qi). They are caught in the act and beaten to a pulp by order of the betrayed husband and left for dead in the fields. Managing to survive, when they do get home they are not allowed to marry in a temple and have to live in a cave outside the village and Weiha becomes, for a short spell, a revolutionary commissar attempting to punish all the crooked officials in the region and then, once the Komintern forces walk in, he has to escape leaving behind his common-law wife, who by now is already a central figure in the entire plot.

Much of the rest of the film is told through her eyes. Boycotted, because of her past, by the entire village, she asks the mayor to obtain a pardon for her man. Instead, he comes into her cave and rapes her, then accuses her of illicit sex and has her cruelly whipped. Later she seduces the man who administered the punishment and they embark together on a dissolute spell of gambling. Once all the money is squandered the man joins the Army and she has to go back to the cave she had left. The film ends with the Japanese planes bombing the village, as they prepare for their invasion.

There are plenty more details in an over-rich plot that twists and turns as it tries to be on the one hand a faithful historical pageant, on the other hand a powerful personal drama. But putting the two together is too much of a challenge, and instead of complementing each other, the two get in each other’s way.

Characters are not sufficiently developed and therefore have to rely on the gifts and authority of the performers, which is just fine in the case of actors such as Zheng Feng Yi or Zhang Yu Qi, but doesn’t quite work out for other roles, which remain emblematic and uni-dimensional. Visually, the landscapes are quite spectacular, with a dark, foreboding mood in the air, but the predilection for shooting into the sun - that is with most of the light coming from behind the characters - blurs the faces and makes it very often difficult to identify them before they come close to the camera.

As ambitious as this project wants to be, and it is certainly a large venture with a massive cast and top production values, there is no new light shed on this period and no characters engrossing enough to really care for. It’s nice to look at, but three hours is a bit too much.

Screenplay: Wang Quanan, based on novel by Chen Zhongshi