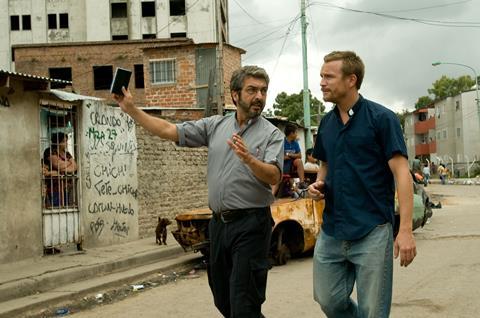 By taking an insider perspective on the slums of Buenos Aires, Pablo Trapero returns to the social concerns established in earlier films such as Leonera (which bedded down in a womens’ prison). White Elephant, a well-made and involving - if not dramatically revolutionary - drama, brings a gritty immediacy to the Hidden City where priests Julian (Ricardo Darin) and Nicolas (Dardennes brothers mainstay Jeremie Renier) wage a futile battle for its inhabitants’ salvation.

Trapero also starts White Elephant with a bang - a raid in the jungle that slowly leads to the shantytown.

Unlike its Brazilian counterparts such as City Of God or Carandiru, White Elephant follows a conventional narrative line which should help it connect well with international audiences (arthouse darling Darin will also be an asset here). Trapero presents us with two priests - the patient, persuasive Fr Julian, who realises his time may be limited, and the taciturn, impetuous Fr Nicolas. They are our entre to a world that feels entirely authentic, a slum that is framed by Argentina’s troubled relationship with the Catholic Church and the tradition of activism by religious orders.

Fr Julian approaches his mission in the “villa” through social programmes - mainly the construction of a hospital on the site of an abandoned “white elephant” building which is now occupied by teeming families, its environs a network of corrugated tin shacks where rival drug dealers violently ply their trade. Fr Nicolas, meanwhile, is a troubled soul, attracted to social worker Luciana (Gusman) and scarred by the violent failure of his mission in the Amazon jungle. They are at once at odds with each other and with the more conservative “official” arm of the church, which has mired the building project in red tape.

After the action of Carancho, Trapero also starts White Elephant with a bang - a raid in the jungle that slowly leads to the shantytown. Julian has brought his old compadre Nicolas here to, he hopes, one day take over his life’s work. It’s a 15-minute intro before the camera pulls back to reveal the Hidden City and its 30,000 inhabitants with an involving tracking shot from Fr Julian’s quarters through the slum.

White Elephant works best tackling these surrounds, with a clear-eyed, seemingly authentic take on the villa and its problems, and the priests feel real as well - from Darin’s middle-class social activist to Reinier’s “gringo” traveller, a man who cannot take the long view. Their faith is sorely tested, and the film makes heavy reference to the “martyred” Father Mujica, killed in the 1970s, as if to signpost the way.  Once Fr Julian makes a fatal mis-step of meeting with the drug kingpins, White Elephant is set on a dramatically inevitable course, but Trapero plays out his points to the closing frame.