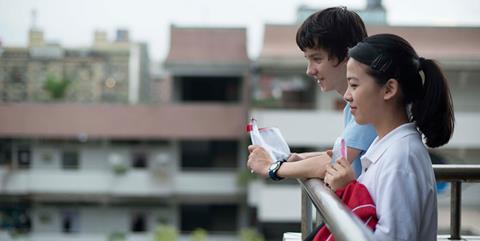 BAFTA-winning documentary director Morgan Matthews proves to just as adept with drama in X + Y. His assured fiction feature debut delicately brings out all the emotions in a heartwarming story that celebrates the resilience of the human spirit and the way that love can change even the most complex of lives. Graced by a string of excellent performances, this has real potential to become a crowdpleasing mainstream British hit and to travel.

Best of all is Asa (Ender’s Game) Butterfield who is emerging as one of the most versatile young actors around. He expertly inhabits the physicality of a boy bewildered by the world and convinced that his differences make him an oddity.

Matthews directed the 2007 documentary Beautiful Young Minds which followed a group of young prodigies competing in the International Mathematical Olympiad. James Graham’s screenplay fictionalises some of those events to focus on the story of Nathan (Asa Butterfield), a mathematical teenage genius diagnosed with a form of autism.

Disconcertingly candid, socially awkward and emotionally aloof, Nathan has always been a handful for his loving mother Julie (Sally Hawkins). She longs for one display of affection towards her or the chance to eat a Chinese meal where the prawn balls don’t have to constitute a prime number.

The rational, purity of mathematics is the one thing that allows Nathan to make sense of the world. Julie encourages him to make the most of his strength and welcomes the willingness of teacher Mr Humphreys (Rafe Spall) to provide Nathan with extra tuition. Humphreys prepares him to try for a place in the British team at the International Mathematics Olympiad. A training trip to Taiwan helps Nathan to find acceptance among his fellow geeks and nerds and it also wins him the friendship of Zhang Mei (Jo Yang).

X + Y might have been pitched as something like Spellbound meets A Beautiful Mind. It could so easily have tugged at the heartstrings and poured on the suffering. Instead, it is nicely understated and takes a thoughtful, measured approach to a story where all the emotional highs are honestly obtained Flashbacks paint a warmhearted picture of the special bond that once existed between the young Nathan and his devoted father. Events don’t necessarily lead to the kind of triumphant finale that might have been expected that allows it to steer clear from the formulaic, triumph of the underdog tearjerker.

The cast are all impeccable. Rafe Spall breaks your heart as the schoolteacher battling both multiple sclerosis and the disappointments of his youth. His Humphreys is a witty, self-deprecating joker. Sally Hawkins captures a real sense of the frustrations and loneliness of a loving mother who has devoted herself to a son whose very nature demands endless reserves of patience and promises little reward in return.

Best of all is Asa (Ender’s Game) Butterfield who is emerging as one of the most versatile young actors around. He expertly inhabits the physicality of a boy bewildered by the world and convinced that his differences make him an oddity. His distant expressions, mubbled words, the way he flinches at contact and retreats into himself all convey what it is like to be Nathan. It is a hugely sympathetic performance and a big part of the film’s appeal as it moves from Taiwan to the Olympiad final in Cambridge and from the discovery that Nathan is not alone in the world to his acceptance that there may be more life than mathematics.