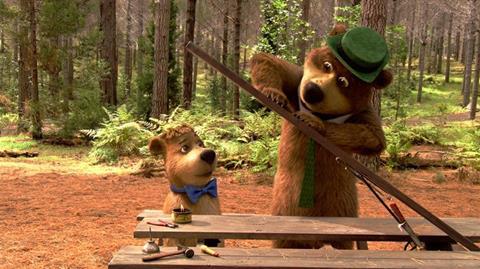 Genial but instantly forgettable, Yogi Bear takes the beloved Hanna-Barbera character and shoehorns him into an all-too-familiar kids’ movie that’s noticeably low on wit or spark. With Dan Aykroyd channelling Daws Butler, the voice actor for the original Yogi Bear animated series of the early 1960s, this 3D film ably blends live-action and animation, but the technical concerns have been given far more attention than the screenplay.

While its broad humour and unsophisticated plot are geared toward small tykes, Yogi Bear features an admittedly impressive melding of the CG-rendered Yogi and Boo Boo with their live-action human counterparts.

Clearly with an eye toward copying Fox’s success launching a live-action/animation holiday franchise with Alvin And The Chipmunks, Warner Bros. will be unveiling Yogi Bear December 17. But family-film competition from the latest Chronicles Of Narnia sequel and Gulliver’s Travels will keep Yogi from claiming its target audience all for itself.

As in the original animated series, The Yogi Bear Show, this film adaptation features Yogi Bear (voiced by Aykroyd) and his loyal friend Boo Boo (voiced by Justin Timberlake), who live in Jellystone Park and match wits with the endlessly harried Ranger Smith (Tom Cavanagh). But when the mayor (Andrew Daly) decides to sell off the park’s land to raise revenue, the gang must team up with a nature filmmaker (Anna Faris) to save Jellystone.

Yogi Bear, like many of Hanna-Barbera characters (Scooby-Doo, Fred Flintstone), exudes a goofy, good-natured, slightly dopey demeanour, and director Eric Brevig (Journey To The Center Of The Earth) has done his best to maintain that gentle spirit for the film, largely avoiding the sort of obnoxiously hip tone many kids’ movies exhibit to seem relevant to a new generation.

Unfortunately, instead of being manic or cynical, Yogi Bear simply feels phoned-in, from its save-the-park storyline to its obligatory action sequences to its pop-culture references aimed at parents who will be dragged to this film by their children. Even Aykroyd’s homage to Butler’s original rendering of Yogi’s warm, deep voice hints at a film that has worked very hard to play it safe.

While its broad humour and unsophisticated plot are geared toward small tykes, Yogi Bear features an admittedly impressive melding of the CG-rendered Yogi and Boo Boo with their live-action human counterparts. With that said, though, some of the other effects work seems needlessly low-rent. And despite being shot entirely in 3D, the film doesn’t have enough visual imagination to really capitalise on the fashionable technology (or the picturesque New Zealand locales).

Of the live actors, Cavanagh dutifully recycles his quiet-guy shtick that worked much better on the TV series Ed, but Faris is nicely bubbly as his love interest. As she proved from her years starring in the Scary Movie series, she is a consummate pro at elevating mediocre material through the sheer force of her personality.