All Musicians Are Bastards 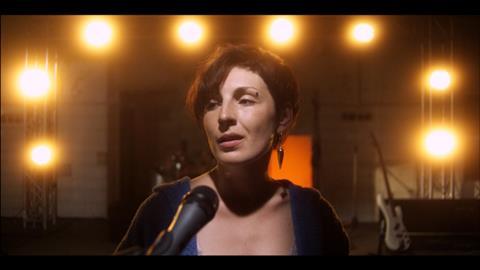 The debut feature of Heleri Saarik bears the hallmark of some of the new wave of filmmaking that has been emanating from the UK over the past few years as social realist trappings are suffused with a surreal air and a wanton disregard for the mores of cinematic convention.

The enjoyment of the film will depend on the audience’s tolerance for characters who want to engage ‘their creative impulse’.

All Musicians Are Bastards follows Leila (Riina Maidre), a singer who seems to spend her time in unsatisfying relationships while slowly drowning in a mire of drink and drugs. As she is surrounded by a crowd of artists – including her unpredictable boyfriend and a frustrated music composer – Leila soon finds the boundaries between fantasy and reality crashing down around her.

Saarik’s background is in music video and it shows in the film, with songs and performances showcased at every turn. Saarik is certainly a precocious talent with a willingness to experiment and – even when it’s not successful – she’s imbued the film with a sense of energy and raw power. But the enjoyment of the film will depend on the audience’s tolerance for characters who want to engage ‘their creative impulse’ as the film blurs the line between celebrating the power of art and lamenting the indulgence and indolence it can inspire in people.

When the film begins to drift into dreamlike allegory, some of the audience may find themselves switching off at the perceived pretentiousness of it all. But those who can stand the artistic angst may find much to enjoy.

Maidre is engaging in the lead coming across as a mixture between Betty Blue and Bette Davis with a smidgeon of Madonna thrown in for good measure. Unsurprisingly the film is also full of – very good – music from new Estonian bands.

It may prove a bit too surreal and confrontational for all but the most hardy of arthouse distributor, but with screenings at Busan already behind it and a genuine sense of difference from other films coming out of the Baltics it should be another popular Estonian film on the festival circuit in a year which has seen the small country churn out many of them