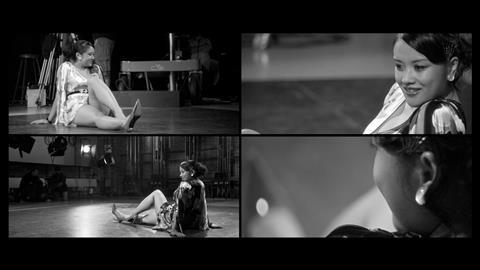 There is much to admire in the wholehearted bravery and honesty of the actors so utterly on show.

Beginning as a documentary-style interview with a sex worker, it broadens to include many aspects of contemporary male and female sexuality, and to consider the limits of what’s permissible on modern movie screens. An October release is planned locally: a world sales agent is not yet in place.

The monochrome movie’s reported $A50,000 budget certainly wasn’t stretched by the set. In an otherwise empty sound stage, prostitute Angie (Katharine Hicks) is being interviewed by an unnamed director (Matthew Holmes) about her life as a sex worker. She’s fully lit and facing multiple cameras; he’s a shadowy presence seen only from behind.

As the at-first-awkward interview progresses Angie morphs into another persona, Angie 2 (Anya Beyersdorf), a far hipper hooker. Eventually we meet eight ‘Angies’, with a mix of ages and ethnic backgrounds, the transitions elegantly achieved by editor Adrian Rostirolla who also uses split-screens with ‘live’ feeds from the four available cameras.

Drama/conflict only kicks in when Angie challenges her unconvincing interviewer to match her own uninhibited boldness. There are many uncomfortable truths in Winter’s intelligent examination of essentially happy hookerdom, for these prostitutes enjoy their sex: drug dependency or physical abuse doesn’t get a mention.

There is much to admire in the wholehearted bravery and honesty of the actors so utterly on show. Saskia Burmeister’s dippy, restless sexuality is particularly riveting. And Winter’s massed Angies come to a fittingly tumultuous climax.

Production companies: Wintertime Films, All At Once