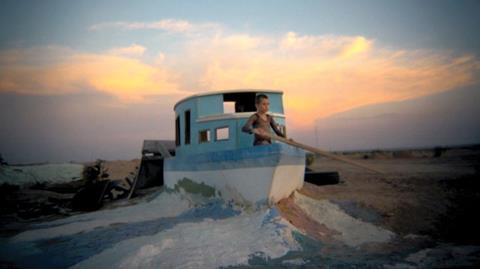 Alma Har’el magical and poetical film Bombay Beach is an enchanting documentary hybrid, beautifully capturing the realities and the dreams of those intriguingly oddball folk who live in the faded and rather surreal California community by the Salton Sea.

The dance sequences help give the film its unique sense of magical realism.

It is a film that enchants and bemuses those who watch it and should be on any watch-list for savvy distributors and festival programmers. It is a film that lingers in the memory and is certainly worth a return visit.

Israeli director Har’el has made her name as a music video director – and that sure touch about incorporating music and dance are the striking points about Bombay Beach – but here she has winningly won over the Bombay Beach denizens that they are happy to go along with the unconventional nature of her film about their home.

The film opens in classical style with archival footage of the strange inland sea from the 1960s when it was perceived as an oasis community in the middle of a desert region, some 50 miles south of Palm Springs.

Cut to present day and the Bombay Beach community live amidst the detritus of previous inhabitants and with dead animals and ruined buildings sharing the same space under an unrepentant sun.

Here she tracks the lives of a handful of the community, each tarnished but oddly hopeful in their own particular way. In main focus are bipolar young Benny Parrish and his dysfunctional family; aging ladies’ man Dorran “Red” Forgy, and would-be football star CeeJay Thompson, who aims to make it to college.

Early in the film there are glimpses of dance moments – as the Parish parents practice their moves in their house; as “Red’ dances with a string of elderly women and as CeeJay breakdances out in the desert – but as the film develops you realise that Har’el has actually built dance into the story and convinced the ‘performers’ to use dance to reflect the strange magic of the environment.

As the credits role you realise that this must be one of the few documentaries to include a choreographer (Paula Present) as part of its crew. The culmination of the dance aspect comes towards the end of the film, as CeeJay and his girlfriend performance a delightful romantic dance in a white painted pergola, rather like dance between Liesel and Rolfe in The Sound Of Music.

The dance sequences – along with the beautifully colourful shooting and wonderfully evocative soundtrack (which features Bob Dylan and band Beirut, who Har’el has worked with before) – help give the film its unique sense of magical realism and acts as a delightful counterbalance to the depressing surroundings of Bombay Beach.

A closing scene of Benny with a fire-engine (he says he wants to be a fireman when he grows up) somehow feels a little clumsy when set against the compassionate elegance of the dance scenes, but at least each character is allowed their own oddball journey.