Hidden In The Woods 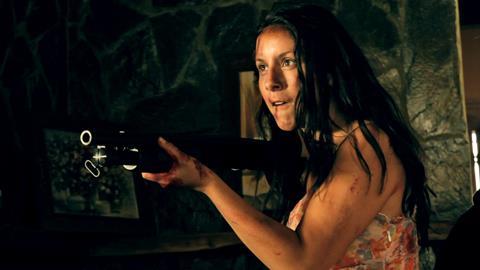 Writer-director Patricio Valladares prefaced the FrightFest screening of Hidden In The Woods (En las afueras de la ciudad) by saying ‘a woman, naked, covered in blood, raped … to me, this is funny’.  Purportedly based on a Chilean criminal case, this inept, hateful effort is a strong contender for the uncoveted title of the Worst Film Ever Shown at London’s FrightFest.

Clumsily staged and edited, with one-note performances and the film has a lone quality aspect in its 1970s-style score.

It may be taking a sledgehammer to a flea, but it’s worth remembering that appalling true-life crime-sprees can inspire films as fine as Snowtown or Henry Portrait Of A Serial Killer.  By contrast with those achievements, this looks even worse than it is.  Valladares reports that US remake rights have been acquired by actor-director Michael Biehn.

The bearlike monster in these woods is Felipe (Daniel Antivilo), a minion of drug kingpin Uncle Costello (Serge François).  He is introduced drowning his ‘whore’ wife in the sink, in front of his daughter, Ana.  Later, he rapes the grown-up Ana (Siboney Lo) and fathers Manuel (José Hernandez), a mutant goon, on her, then takes to raping Ana’s sister Anny (Carolina Escobar).

When cops arrive to investigate a domestic abuse allegation, he kills them with a chainsaw and is eventually arrested.  Costello is concerned that Felipe, who has hidden a large stash of his drugs, will inform on his organisation, so tries to have his confederate assassinated in prison.

The girls and Manuel flee to a cabin in the woods, Ana becomes a hooker to support the family, and Costello sends a pack of thugs to get his drugs back, which they try to do not by, say, searching the cabin for the stash but further raping and torturing the girls during harsh interrogation.

Though it dwells luridly on the misuse of women, the film is far more offensive in its portrayal of men.  Every man in this film except Manuel is a woman-hating rapist, including two passing backpackers who abuse Anny to the extent that she takes to cannibalism, which becomes a family trait.

The only consensual sex act in the film turns out to be the infidelity that inspires Felipe to the initial murder and kicks off the cycle of atrocity.  Felipe escapes from prison, and the girls – having slaughtered another pack of rapists - go after Uncle Costello to stop him persecuting them.  The climax finds any number of abused, injured, bleeding folk writhing on the floor together, seemingly unable even to properly murder each other at point-blank range.

Clumsily staged and edited, with one-note performances and the film has a lone quality aspect in its 1970s-style score.  ‘Extreme’ enough in subject matter to attract some festival attention, but unlikely to win over many audiences.