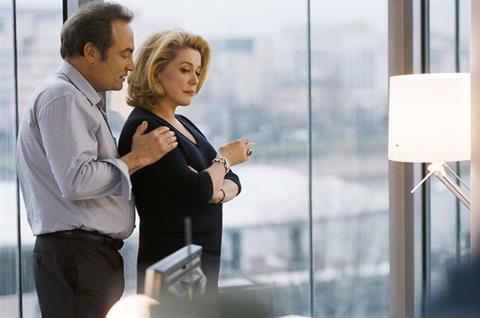 Being the kind of muckraking journalist who insinuates himself into his unsuspecting subjects’ lives proves emotionally punishing for a writer as ambitious as he is unscrupulous in His Mother’s Eyes (Les yeux de sa mere).

Klifa loves letting the camera linger on the planes of his handsome actors faces.

Fetchingly cast, over-stuffed melodrama piles on its interwoven complications to relatively modest impact although everybody acts up a storm. Nowhere near as much fun as director and co-writer Thierry Klifa’s previous film, Family Hero, this venture obliges viewers to work harder than they should have to connect the dots. Developments that should pack a wallop mostly remain politely aloof plot points.

There are a lot of attractive and talented actors on screen, but French audiences haven’t been overly impressed since the film’s March release. Honourable but tepid production screens April 14th at COLCOA and should be welcome wherever pedigreed French ensemble pieces arouse curiosity.

Maria’s (Geraldine Pailhas) grandmother, Judit (Marisa Paredes), contacts her in time to see her ailing father Miguel draw his final breath. A prominent Spanish writer and activist who returned to Spain  from exile in France after Franco’s death, he played a much bigger role in raising Maria than his ex-wife, Lena, (Catherine Deneuve) did. Lena, the reigning anchor on French TV’s nightly news for some 15 years, was always off in the field during her daughter’s formative years.

A former star dancer with the Paris Opera Ballet, Maria will soon be performing a duet at a major Paris venue. Because it’s that kind of narrative, Maria decides to add to the stress of grief and rehearsals by writing to Bruno (Jean-Baptiste Lafarge, impressive), the son she had at 16 and gave up for adoption two decades prior.

Dismissively uninterested in his suddenly revealed birth mother because he’s so close to his adoptive parents, Brittany-dwelling Bruno is being trained for an amateur title bout in by his ex-boxer dad (Jean-Marc Barr). Bruno’s mom (Marina Fois) is introduced as the person who does his laundry and fixes meals, but she also turns out to be a physician.

Under contract to write a tell-all book about Lena, Mathieu (Nicolas Duvauchelle) has landed a job as her trusted assistant. (Deneuve and Duvauchelle were also both cast in André Techiné’s The Girl on the Train). He’s tight-lipped, extremely competent and knows how to work his boyish vulnerability to his advantage — right down to passing out without warning (“I have low blood pressure - it’ll pass”) to gain sympathy and bond with his marks.

For a while it seems as if this is aiming to be a 21st century variation on Pasolini’s seduce-everyone-in-sight Teorema, but Mathieu doesn’t actually bed EVERYBODY he’s writing about.

Mathieu, who was once a set design intern on a piece in which Maria danced, quickly gains her confidence to the point that she trusts him to look up the son she’s never met. Self-involved Lena never heard about her daughter’s teen pregnancy and has no idea she’s a grandmother.

Oh yeah - the network may be planning to replace Lena. Mathieu is juggling a year’s worth of machinations for his own Betrayal of the Month Club when unforeseen tragedy strikes.

Klifa loves letting the camera linger on the planes of his handsome actors faces but too many developments are overly convenient. On the continuity front, two serious sets of facial bruises heal in record time.

The oceanfront horizons of Brittany contrast nicely with the indoor efforts of dancers and TV crews and the score is pleasantly restrained.

Spanish veteran Paredes contributes exotic gravitas and Deneuve delivers a very fine speech to her television audience. She also defiantly smokes where she’s not allowed to - which somehow makes Lena more, not less, sympathetic. Denouement, like everything leading up to it, manages to be both too much and too little.