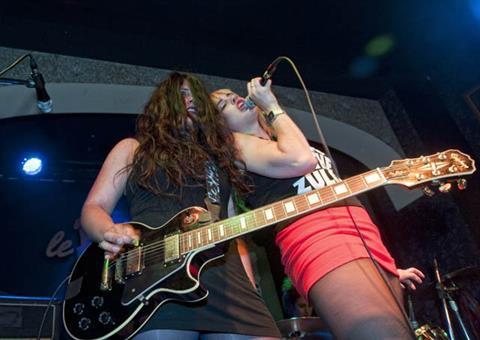 Anyone with an instrument or a voice can form a band; these days anyone with a digital camera can film it and, thanks to technological advances, show the result at the local multiplex - although not too many will be willing to give Basque rock doc Holes (Zuloak) such a slot, despite the feisty all-girl rockers at its fore. Destined for the specialised circuit, this energetic assemblage (of varying quality) has some fun moments, particularly when the girls are performing, but gets bogged down in the Basque music scene, an area of limited global appeal.

The film concludes with a terrific concert in the Basque capital of Vitoria, by which time the band has a dynamic new lead singer who belts out Zuloak Riot as if her life depends on it.

Director Fermin Muguruza, a music producer by trade, has collaborated with young student Arrate Rodriguez, who sees herself as a Basque Malcolm McLaren, on this project, which loosely revolves around her setting up the band Zuloak and then documenting its inevitable Commitments-style slide into oblivion.

And if Holes had restricted itself to that core story, the result might have been a smoother ride. These White Stripes-influenced girls are quite fierce, with lots of hair and charisma and a big attitude as witnessed in the film’s opening sequence American Dick, quickly followed by shots of them waxing their moustaches. There’s also a stripper who doubles on the decks, dressed in a pair of PVC knickers - sadly, they need a drummer, so she’s out.

Even when Zuloak begins to disintegrate, these girls are still interesting, although Arrate seems to be their issue and she’s the one behind the camera most of the time, which annoys them. This leads the viewer into a peculiar realm where we realise we wouldn’t be watching Zuloak without her camera, but it’s also the reason they’ve split up.

Shot in the Basque language with Spanish subtitles, Holes makes an ill-advised detour into interviewing the area’s more successful female musical artists without properly identifying who they are or why they might be of significance. All easily rectified with some post-production tweaking, should Atera Films make the requisite sales (which will most likely be to music-themed festivals and sidebars).

The film concludes with a terrific concert in the Basque capital of Vitoria, by which time the band has a dynamic new lead singer who belts out Zuloak Riot as if her life depends on it before leaving for Manchester, where hopefully she’s found a new gig.