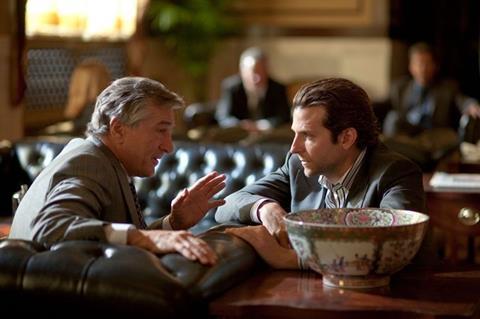 Action thriller Limitless takes a dopey – in more ways than one – premise and spins it out to strictly limited effect. Producer and US distributor Relativity Media will have to leverage the star power offered by Bradley Cooper and a briefly seen Robert De Niro if it is to make much of a mark at the box office with this, its first co-production with Richard Branson’s new Virgin Produced outfit.

In his first dramatic lead since breaking through with The Hangover, Cooper is watchable and energetic.

The PG-13 rated thriller will at least face fairly light competition when it opens in North America on March 18. Competition could be stiffer when the film finds its way into international territories, mostly through independent distributors.

Cooper’s shabby New York author Eddie Morra is struggling with writer’s block when a shady acquaintance introduces him to NZT, a secret new ‘smart drug’ that gives users access to the full 100% of their brain power.

After dashing off his book, learning a few new languages and making millions on the stock market Eddie is hired by corporate mogul Carl Van Loon (De Niro). But his involvement in high finance and his need to replenish his NZT stash brings him to the attention of various pursuers with an equally desperate desire for the dangerous superdrug.

Director Neil Burger (2006 drama The Illusionist) comes up with some clever visual touches to convey Eddie’s transformation into a drug-fuelled superman but he can’t make up for the silliness of the premise and he never quite establishes the darkly humourous tone that seems to be intended.

In his first dramatic lead since breaking through with The Hangover, Cooper is watchable and energetic but not commanding enough to carry a film with only one other significant character. De Niro has only a handful of scenes and doesn’t bring much to his one dimensional role.