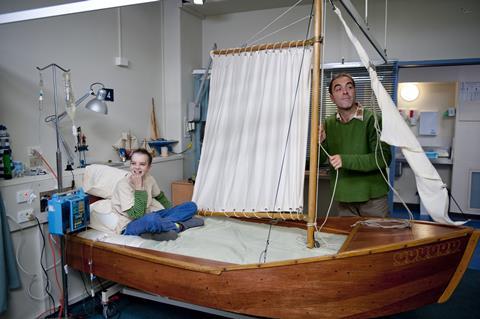 This fact-filled hospital weepie will fit well on cable/satellite TV with its tale of two young boys contracting deadly leukaemia and the desperation of their parents. Matching Jack is aimed at an older audience prepared for the worst, hoping for the best, and though it’s inclined towards soapy situations and dialogue, the emotions on display are raw and honest. One would require a heart of granite not to shed a tear or two.

The two child actors are splendid Tom Russell tops his impressive 2009 debut in The Last Ride, and Kodi Smit-McPhee (The Road) begins to look like a major international talent.

When it becomes clear that Jack’s only hope is a bone marrow transplant from a matching donor, preferably a sibling, Merissa begins a phone-call and door-knock trawl through David’s many past affairs, hoping to find an unacknowledged son or daughter.

The wife and husband film-making partnership of Nadia Tass and David Parker haven’t made a big screen feature since Amy (1998), though they’ve delivered several well-regarded US telemovies (including The Miracle Worker, and The Shirley Temple Story). Parker combines co-producing and co-writing with cinematography, while Tass again proves herself an exceptional director of actors.

Barrett is moving as the fiercely determined mother, and Nesbitt combines a Robin Williams cheeriness-in-the-face-of-despair with a heart-breaking acceptance of reality. The two child actors are splendid - Russell tops his impressive 2009 debut in The Last Ride, and Smit-McPhee (The Road) begins to look like a major international talent.