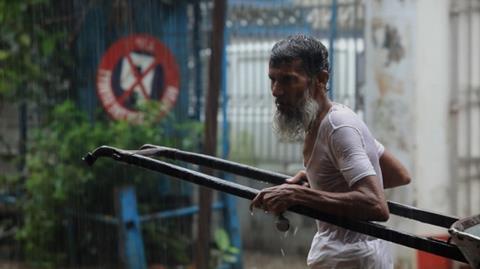 The documentary My Barefoot Friend (or to give it its rather lumbering full title, My Barefoot Friend: The Story Of Shallim And His Old Rickshaw) is a fascinating and absorbing delve into the life of a Calcutta rickshaw driver Shallim (and his calloused feet), though the real interest comes in the relationship between Shallim and the film’s director Lee Seong-gyou, who has been filming and recording him for some years.

South Korean director Lee Seong-gyou offers up a fascinating glimpse into the life of Shallim and his fellow rickshaw drivers.

It is the perfect sort of film to feature prominently in other films festivals given its stirring subject matter and strong international credentials.

Shallim has been pulling his rickshaw around the city for 35 years, focusing on the tourist location of Sudden Street, but his big ambition it to move up a grade and buy a motorised rickshaw. But when his wife get ill plans are left behind as their money is needed for her treatment.

South Korean director Lee Seong-gyou offers up a fascinating glimpse into the life of Shallim and his fellow rickshaw drivers (many of whom are great characters in themselves and would make for perfect film subjects), and also shows his commitment to his art by running after – and alongside – Shallim to gather footage.

He also makes great use of the vibrant Calcutta backdrop and he tells the often quite gripping story of a man trying to achieve his dream against considerable odds.