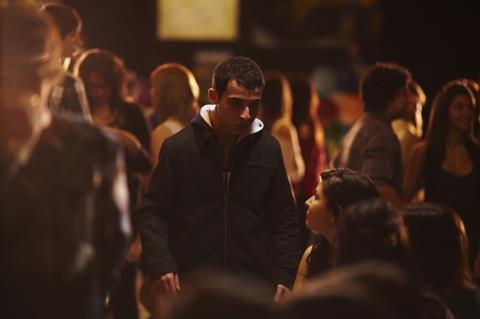 A thin script plunges ahead in slow motion toward an inconclusive ending in Ivan Grbovic’s well intentioned but hopelessly muddled first feature. The coming-of-age crisis of a dark skinned young man of Middle Eastern origins with a walking disability, who runs to the imaginary comfort of internet chats to escape from the bleak reality of his life and his physical limitations is neither original nor detailed enough to fill up all of the picture’s running time.

Ali Ammar, in the lead, offers a sincere but rather glum interpretation of the lead character.

Though the pain and frustration of the main character is made perfectly clear early on, the excessive length of each scene and the frequent repetitions Grbovic indulges in suggest everything he has to say would fit much better in the frame of a short film.  Shot predominantly in dark interiors which should have looked better, given the 35 mm. platform, and moving at a snail’s pace, this could turn out to be a hard sell on the open market.The film screened in competition at the Karlovy Vary Film Festival.

Surly, frustrated and angry but keeping it bottled down inside most of the time, Rami (Ali Ammar) is a solitary boy at the end of his adolescence, without a friend in the whole wide world, who hates every single moment of his existence. A cripple in everyone’s eyes including his own, he can’t stand the idea of becoming an accountant, he suffers having to help in the family restaurant ruled with an iron fist by his father (Joseph Bou Nassar), he dislikes providing alibis for his younger sister every time she goes to a party at school and he couldn’t care less about his older sister getting married.

All he yearns for, like every boy his age, is some female companionship and a bit of romance, if possible. But he is terrified at the response he might get when he has to face a girl in real life, and allow her to discover that he is a diminished person. For that is how he has always been treated, even by his loving family, and that is how he has finally come to accept himself.

The only time when he feels good about himself is in front of his computer, chatting as “Romeo11” with a girl who is fascinated by the fictional identity he had invented for himself as a high powered executive travelling around the world in business class, staying in luxury hotels and closing major deals every day of the week.

She insists on meeting him, he finally gives in forgetting for a moment his personal problems, but ultimately gets cold feet and runs away back home, where in quick succession he informs the family that he is giving up his studies and does not intend to come back to the family restaurant any more. By the end of the film, what Rami doesn’t want to do or be is pretty clear, though no surprise for the audience, what he does want or how to go about getting it,  is as unclear to him and the viewers as it was when the film started.

Physical impairment turning people into outcasts has been explored often enough, from every possible angle. Its personal, social and psychological aspects are frequently dealt with at length and going back over the same arguments once again, as devotedly as one does it, is not much help, unless some new light is thrown upon them, which is not the case here. Ali Ammar, in the lead, offers a sincere but rather glum interpretation of the lead character, resorting mostly to one single expression, the more interesting performance being offered by Joseph Bou Nassar, as his stern father, a stickler for tradition who dearly loves and supports his family, in his own way.