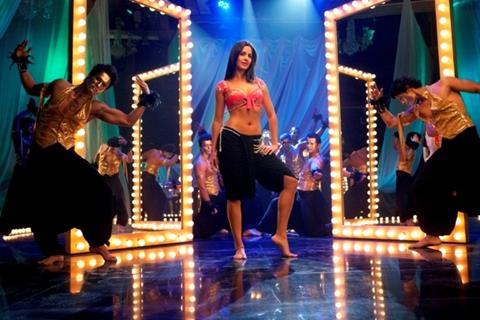 Director Farah Khan paid tribute to - and made fun of - Bollywood in her hit 2007 film Om Shanti Om, while in her latest, Tees Maar Khan, she appears to be ridiculing the industry, even lifting her theme from Vittorio De Sicca’s After the Fox, a trait mainstream Hindi cinema is notorious for.

Akshaye Khanna is delightful as a caricature of a Bollywood hero.

Sometimes Hindi cinema favours a frame-by-frame copy - as Dil Hai Ke Manta Nahi (Frank Capra’s It Happened One Night ) was - though mercifully, Tees Maar Khanis not quite that. Taking £318,000 from 57 UK screens on its opening weekend, the movie has been faring poorly in India after an impressive opening weekend.

Even though it is a spoof, the film is often tediously exaggerated and downright silly, relying on sheer buffoonery to get the narrative moving.Celebrated criminal Tees Maar Khan (Akshay Kumar) escapes the clutches of two bumbling police officers, escorting him by plane from Paris to Mumbai, by locking the pilots out of their flight-deck. He gets a job from a couple of smugglers, conjoined twins, to rob a train stacked with gold and priceless antiques.

Pretending to be a movie director, Khan tricks his girlfriend Anya (Katrina Kaif), superstar Aatish Kapoor (Akshaye Khanna) and a whole village into believing that they are part of a film shoot, while they are actually being made to commit a heist.

The film appears a trifle unpolished, and while Kumar is his usual clownish self, Khanna is delightful as a caricature of a Bollywood hero (partly based on Shahrukh Khan). Kaif is very pretty and extremely provocative, particularly in the rocking song, My Name is Sheila, but beyond these her mannerisms are as annoying as the script itself.