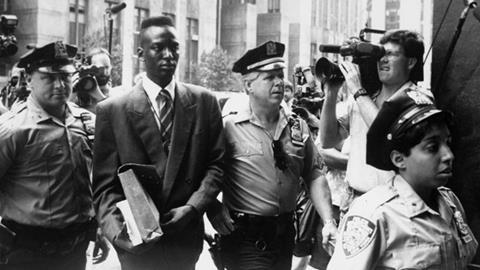 New York’s Central Park Jogger case of 1989 galvanised public and media attention in a crime-ridden city reeling from a wave of violence, much of it associated with the arrival of crack cocaine and the ensuing gangland drug wars. The brutal assault and rape of a young and successful Upper East Side white woman who had been jogging in the park was seen as a symbolic line in the sand, and the trial of five black and Latino youths aged between 14 and 16 who had confessed to the crime became loaded with symbolic agendas, the more racist of which were hidden behind a thin veneer of political correctness.

The three directors eschew the bullying tactics of off-screen narration in favour of a deftly edited and interleaved series of interviews.

Handed down sentences of between six and 13 years despite the lack of any evidence except their own contradictory confessions, all five served complete terms before another man – a serial rapist whose DNA matched traces found on the victim – confessed to the crime. This stirring, well-researched and good-looking documentary, which played out of competition in Cannes, charts the case and its fallout from the point of view of the five wrongly convicted youths, now in their thirties.

It’s a gripping story that comes in a well-crafted package, and although many viewers may end up seeing it on smaller screens (it was part-funded by PBS), the film has what it takes to interest specialised theatrical documentary distributors.

What makes The Central Park Five more than just a campaigning story about a miscarriage of justice is its focus on the why as well as the what: why was the police work so shoddy, why were the underage defendants’ rights not respected, why did the judge and the jury allow inconsistent and inaccurate confessions to trump witness and DNA evidence?

If Michael Moore had taken on the subject he would have told us the answers in no uncertain terms. Here, however, with the exception of some explanatory captions, the three directors eschew the bullying tactics of off-screen narration in favour of a deftly edited and interleaved series of interviews.

As well as the five wrongly convicted men (only one of whom refused to appear on-screen), we hear from relatives, lawyers, journalists who covered the case, a social psychologist, a historian who specialises in racial issues, one of the jurors, and Ed Koch, who was mayor of New York at the time. The interview-only tactic builds authority, and leaves the audience free to draw their own conclusions about how social and political pressure can create narratives of guilt that become self-sustaining.

There’s also plenty of emotion, however, in the accounts of the five men and their relations; they recount their stories with quiet dignity, sometimes choking up as they relive painful memories. Archive footage is also deployed to good effect – most devastatingly when we see the youngsters’ actual videotaped confessions from 1989, as filmed in the police station early in the morning after all-night interrogations by battle-hardened homicide detectives. The HD camerawork is crisp and cinematic, while Doug Wamble’s partly acoustic soundtrack discreetly underscores the film’s emotional arc.