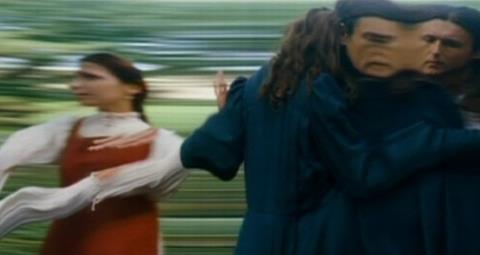 With overtones of unique films such as Chris Marker’s La jetée and Aleksandr Sokurov’s Russian Ark, The Gravedigger (A sírásó) is an experimental and compelling affair that utilises distorted photographic images to create something that feels extremely fresh yet resolutely old fashioned.

Those who stick with it will find a work of intriguingly surreal compositions and savage beauty.

A winner of the FIPRESCI Prize at the 11th New Horizons Film Festival – which means it has already guaranteed distribution within Poland – this should prove popular amongst arthouse distributors looking for esoteric product whilst a long life on the festival circuit seems assured.

An adaptation of a short story by Bohemian-Austrian Rainer Maria Rilke, the film tells of a stranger who comes to town and gets a job as a gravedigger. His charms bewitch the daughter of the town’s leader, but when a plague hits the community his mysterious demeanour brings him under suspicion. Soon he is besieged by the townsfolk who are convinced that he is the engineer of their unfortunate circumstances.

Filmed on the same technology used to document the finishes of horse races, this marries the darkness of Rilke’s story with abstract – and sometimes grotesque – imagery that moves too slowly to suggest movement and instead gives proceedings of a dreamlike air. Some audiences might find it slightly overwhelming – as the camera continually tracks from left to right over blurred and deformed images – but those who stick with it will find a work of intriguingly surreal compositions and savage beauty.