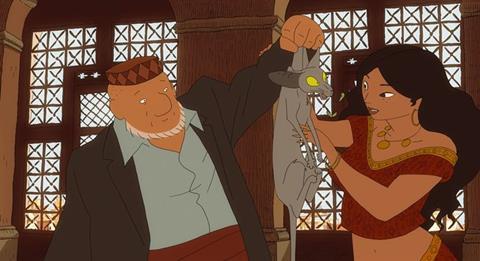 In 1920s Algiers, the titular critter eats a talking parrot and is abruptly able to express aloud the thoughts he’s always had, in perfect French. The larger than-life irreverence of prolific comic’s artist Joann Sfar’s directing debut Gainsbourg is only present in flashes in this visually pleasing but very talky animated adaptation of his best-selling five-volume saga The Rabbi’s Cat (Le Chat du Rabbin).

For someone as gifted as Sfar at visual storytelling, the film is very, very talky.

Mildly but consistently entertaining hand-drawn 3-D venture competes this month in Annecy, should find a built-in audience with the books’ fans and is a given for Jewish film festivals. But although the source material is subversive and funny, slyly mocking the world’s great monotheistic religions while simultaneously cheerleading for religious tolerance, the ineffable spark is missing that would have elevated this to truly special status.

After Rabbi Sfar (voiced by Maurice Benichou) and his shapely daughter, Zlabya, (voiced by Hafsia Herzi) realize they’ve lost a parrot but gained a talking cat, the nameless feline (voiced by François Morel) is next seen reading Stendhal’s The Red and the Black out loud to Zlabya. Rabbi Sfar, a widower who has officiated for a small Jewish community for 30 years, is affable and reasonable in most matters, but forbids the cat to continue its close relationship with his daughter.

The cat’s personality is sort of like Bart Simpson if Bart experienced sexual jealousy. The cat’s frank desire to be caressed by the Rabbi’s daughter is part of the film’s distinctly European approach; a languor that is not entirely innocent (but will probably go right past kids) permeates the proceedings.

To curry favour, the cat expresses an interest in getting circumcised, converting to Judaism and celebrating its bar mitzvah. (He’s “only” seven but argues that in cat-to-human years he’s well past age 13.)

Illustrator Sfar - whose genetic and cultural Jewish heritage happens to be half Ashkenazi (Europe) and half Sephardi (North Africa/Middle East) - nicely conveys the idea that Judaism, Christianity and Islam have a great deal in common but human stupidity is universal, thereby making an ostensible period tale pertinent to contemporary multicultural France.

In export terms, stories of Ashkenazic Jews have always predominated. The two La Verité si je mens (Would I Lie To You?) films - smashes in France, with a third instalment on the way - did not travel particularly well. Distributors perhaps assumed that the antics of Jewish characters of statistically less-prevalent North African heritage would be disorienting to audiences acclimated to the cultural traditions of European Jewry.

The Rabbi’s daughter wears calf-length harem pants and an off-the-shoulder top with a bare midriff. The Rabbi also dresses casually, as befits the climate. He is refused service by a waiter who says they don’t serve Jews or Arabs, but the same waiter turns obsequious when the Rabbi’s cousin - a lion tamer who walks the streets with his lion - comes to Algiers for a visit.

More or less dropping the daughter, the film takes its characters on a lengthy odyssey through the desert in search of Jerusalem. There’s genuine tension when the expedition accepts a powerful Muslim’s hospitality and must answer his query “Wouldn’t you agree that Islam is the best religion?”

While the animation is pleasant and evocative, it’s not dazzling. The 3D treatment feels tacked on. Where Sfar excels - as with the animated passages in Gainsbourg - is in “speaking” visually of horrors via a disarmingly peppy, silly tone. A Russian artist’s drawings of the pogrom that precipitated his unlikely escape to Algeria come to life and make the Cossacks’ rampage look comical.

Likewise, layers of colonial arrogance are conveyed with the opposite of the heavy-handedness that made Outside The Law such a self-righteous slog.

The film, co-directed by Antoine Delesvaux, mocks the French administrative tradition when after 30 years as de facto Rabbi, officiating in Hebrew to Jews who speak Arabic, the Rabbi is required to take a written French exam he may not pass. The cat, whose mastery of French is superlative, helps the Rabbi prepare to comic effect.

For someone as gifted as Sfar at visual storytelling, the film is very, very talky. That said, voice work in French is a delight.

Screenplay: Sandrina Jardel, Joann Sfar based on his series of graphic