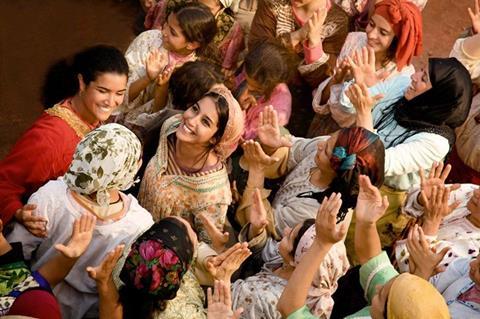 The proven populist touch of director Radu Mihaileanu (The Concert etc) is well suited to The Source, a beguiling, big-hearted tale of the struggle for female emancipation in an African village. Opening titles invite us to question whether the story is true or merely a fairytale. The subsequent film veers towards the fairytale but still captures some of the complexity of a situation in which entrenched attitudes are confronted by a hunger for change. The emotional warmth of the storytelling and feel good tone will endear this to a wide arthouse audience and might even connect with a broader audience who have responded to similar tales of female empowerment from Caramel to Made In Dagenham.

Beautifully photographed amongst the harsh light of the dry, desert landscapes, The Source frequently feels like a musical and the women constantly burst into song as a way of expressing their feelings and grievances.

The setting is a small, drought-ridden village situated somewhere between North Africa and the Middle East. Widespread unemployment  and the relative stability of peaceful times have left the male population with little to do but sit around the village, drinking tea and idling away the day. The women are still expected to fetch water from a mountaintop spring. They travel across barren rocky ground in sweltering heat to perform this backbreaking task. The journey is fraught with difficult and danger. Pregnant woman have lost their children after falling on the path.

Leila (Leila Bekhti) is the spitfire who believes that something has to change and that the men should carry the water and play some active part in the domestic necessities of the village. Her schoolteacher husband Sami (Saleh Bakri) is sympathetic to her cause and Mother Rifle (Biyouna) encourages her to organise direct action-a universal withdrawal of conjugal rights until the menfolk acknowledge their right it equality.  It is the beginning of a long and bitter struggle that pits traditionalist against reformist, sparks clashes between the generations and carries personal consequences for many of those concerned.

Intitially, it appears that The Source may appear too simplistic and one-sided with the women as heroic rebels and the men as feckless chauvinists locked in an unsustainable notion of women as  wives and mothers who know their place and never complain. Fortunately, the perspectives do shift and we also gain a sense of how some of the men feel emasculated by the erosion of their traditional roles.

Beautifully photographed amongst the harsh light of the dry, desert landscapes, The Source frequently feels like a musical and the women constantly burst into song as a way of expressing their feelings and grievances. It would not be entirely surprising to see the film translated into a Broadway show with the sweep of Seven Brides For Seven Brothers or Fiddler On The Roof.

The sheer injustice at the heart of the story mean that the audience are automatically sympathetic to the women even if the film feels slightly overlong. Performances throughout are believable and touching with special mention to Biyouna whose wise, feisty Mother Rifle is the heart and soul of the women and their cause.