What A Beautiful Day 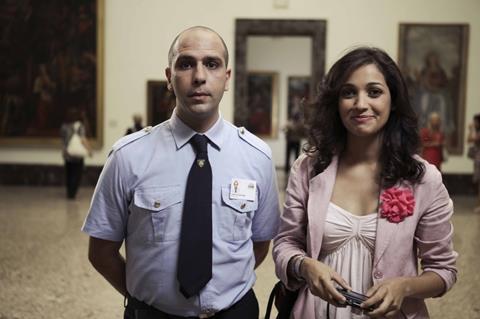 History dictates that Italian comedies rarely travel extensively which would be a shame in the case of What A Beautiful Day (Che bella giornata). The second collaboration between television comic Checco Zalone and director Gennaro Nunziante is a boisterous, sweetly silly crowd-pleaser that should be able to win over some international audiences with its sunny disposition and mild-mannered satire.

Some genuinely funny moments and the odd toe-tapping song to raise a smile.

It is difficult to discern exactly why it has become Italy’s all time box-office champion, but it displays the kind of infectious good spirits that could prove surprisingly exportable.The film is being shown as part of the touring Italian Film Festival in the UK.

Zalone’s Checco is a gormless, delusional buffoon in the tradition of Inspector Clouseau and Johnny English. Having failed to gain entrance to the carabinieri for the third time, he uses family connections to secure employment as a security guard at Milan cathedral.

This makes him a target for a brother and sister team of Islamic terrorists seeking an unwitting dupe for their plan to bomb the cathedral. As Farah (Nabiha Akkari) works her wiles on him genuine romantic feelings begin to develop.

What A Beautiful Day is an unadventurous but engaging mixture of slapstick antics and random potshots at Italian stereotypes, lampooning the country’s chauvinism, prejudices, culture of corruption and eternal love of mamma’s home cooking.

The initial reliance on easy gags and obvious punchlines settles down into a more relaxed pace with some genuinely funny moments and the odd toe-tapping song to raise a smile. Sun-kissed locations and a polished production enhance the overall appeal.