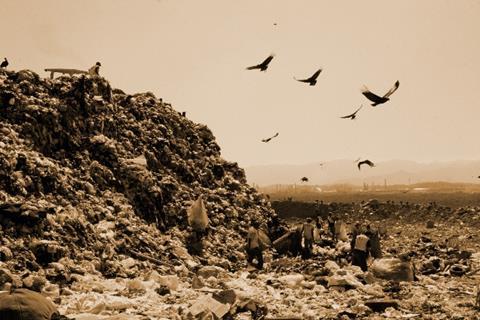 Sao Paolo-born Muniz, one of Brazil’s best regarded artists, uses materials including garbage to create his art, so Walker has some great material to hand. She has unfortunately opted for a simplistically inspirational story, however, and WasteLand merely skims the surface rather than digging any deeper.

Executive produced by Fernando Meirelles, Waste Land’s feel-good story about art’s ability to elevate the impoverished bears a stylistic resemblance to 2004’s Oscar-winning documentary Born Into Brothels, whose modest box-office returns could be a harbinger of this film’s commercial chances. Winner of the audience award at Sundance in the world documentary category, Waste Land could benefit from strong word-of-mouth if it finds theatrical release.

Walker structures her story around Muniz, who currently lives in Brooklyn but wants to give back to Brazil’s poorest by creating an art project about Jardim Gramacho, the world’s largest rubbish dump, which will hopefully raise money for the locals.

While the real-life events documented are unquestionably praiseworthy, Waste Land suffers by reducing a complex story into a generic uplifting tale.

In trying to showcase the humble grace of those who collect recyclables from the dump, Walker (with co-directors Joao Jardim and Karen Harley) tends towards footage which presents them as adorable martyrs, which becomes repetitive and faintly condescending.

Waste Land also misses a possibly intriguing angle by painting Muniz as a bland hero. His intentions certainly seem above reproach, but Walker never bothers to examine his motivations. One of Waste Land’s most interesting (but least explored) areas is Muniz’s creative process. Walker provides a brief introduction to his background as an artist who works with garbage, thereby turning other people’s refuse into photographs that comment on the easy disposability of modern society.

With that in mind, Muniz’s trip to Jardim Gramacho should provide a unique opportunity for him to combine his thematic concerns with more emotional ones. But Walker largely brushes past this more personal component, failing to illustrate how this project fulfills Muniz as both an artist and a Brazilian.

While an argument could be made that focusing on the dump’s poor residents is a more valuable use of resources than making a fawning documentary about a famous modern artist, the film’s scattershot treatment of Muniz is indicative of Waste Land’s larger structural problems: Walker finds some thought-provoking possibilities for a riveting documentary but touches on too many too briefly for the film to have the emotional wallop it could have punched. Ultimately, WasteLand feels designed simply to deliver an inspiring message about our ability to help others, but the film-makers work so hard towards that end that they gloss over the participants who are meant to embody that message.

Walker’s use of electronica musician Moby’s ambient songs provides a soulful, emotive backdrop to the images of poverty and triumph, although the film-maker occasionally leans too heavily on these tunes to elicit appropriate audience reactions.