Q&A: Hong Sangsoo on having two films in Cannes this year

Korean film-maker and Cannes regular talks The Day After and Claire’s Camera. 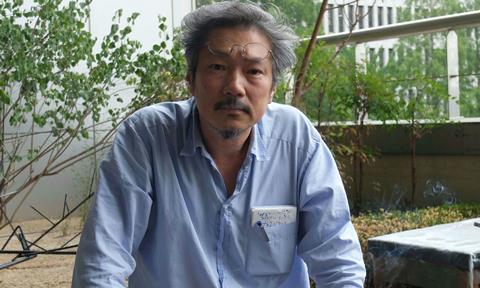 To date, Korean auteur Hong Sangsoo has had a total of eight films at Cannes, including his debut feature The Power Of Kangwon Province in the 1998 Un Certain Regard sidebar; Hahaha, which won the 2010 Un Certain Regard Prize; and 2012’s In Another Country, starring Isabelle Huppert, which was in Competition.

This year, he returns with two features, his ninth and tenth at the festival - The Day After in Competition, starring Kim Minhee who won the best actress prize at the Berlinale with her role in Hong’s On The Beach At Night Alone, and Claire’s Camera, also starring Kim and featuring Huppert, in Special Screenings.

You finance and produce all your films with your own company, Jeonwonsa Film Co. How do you manage that?

It’s difficult but it’s something I have to do to lower the production costs. And my films usually do not do lots of international presales.

What kind of budget do you usually work to and how long are your shoots?

Each film budget is around $100,000 and usually takes three weeks, although for Claire’s Camera it was two weeks.

Your films are often noted for their settings and locations. How do you go about choosing them?

For The Day After, I decided to work with Kwon Haehyo [the male protagonist] and then I recalled a publishing company I had visited, so I talked with the head of the company. He said he leaves his house every morning at around 4:30am to go to the office. Without really knowing why, I wanted to follow him on his route from his house to the office. That’s how everything started — the actor and the route.

And for Claire’s Camera?

For Claire’s Camera, I decided to work with Isabelle and Kim Minhee, and some weeks later we arrived at Cannes. One or two days before shooting, I toured the beach and some alleys. I found the beach tunnels, and cafés and alleys. So it was the actors and the tunnels.

On The Beach At Night Alone deals with a well-known actress who is getting over a scandalous affair with a director. Since its production, you and Kim Minhee have been quite public about your love for each other.

Maybe I use personal details more than others, and my films must reflect something about myself, but I don’t intend them to be a representation of ‘my life’ or ‘part of my life’.

In The Day After, we see the character played by Kim slapped by her boss’s wife, who mistakes her for her husband’s lover. What were you thinking of when you created this story?

First, there is a ‘piece-material’ that comes along without knowing why. I then put it in a place where I think it fits well with a reason or two, but even those reasons seem like a pretext. I cannot explain how a detail comes to exist, logically or psychologically, in earnest.

You often work more than once with the same actors. To what degree are you inspired by your actors and how much do you improvise on set with them?

Actors are very important. They are models and landscapes and the weather of the day, etc. Most actors follow the directions and the dialogue in the script, and maybe less than 10% of the outcome is the result of on-set improvisation.

You have surely done more for the popularity of soju among cinephiles around the world than anyone else. Why is there so much drinking in your films?

There are many drinking scenes in the films, I guess, because I drink quite regularly.