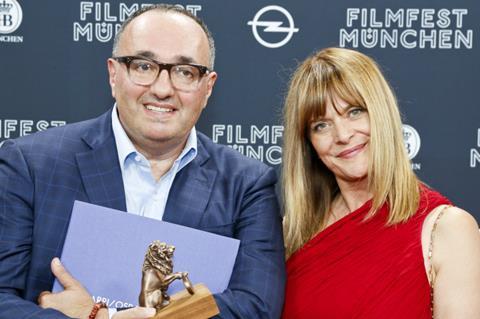 Films by Andrey Zvyagintsev, Pedro Pinho and Tom Lass were among the winners at the 35th Filmfest München which came to a close on Saturday evening with a gala awards ceremony before the German premiere of Lone Scherfig’s Their Finest with actor Bill Nighy and producer Stephen Woolley in attendance.

The €50,000 ARRI/OSRAM award for the best international film in the CineMasters sidebar went to Zvyagintsev’s Cannes competition film Loveless which opened in Russian cinemas through WDSSR on June 1 and will be released in Germany by Wild Bunch.

Producers Alexander Rodnyansky and Serguey Melkumov accepted the award in Munich from the hands of the international jury comprising German director Valeska Grisebach (whose latest feature Western premiered in Cannes’ Un Certain Regard in May), producer Markus Zimmer, and actress Nastassja Kinski.

This is the second time Zvyagintsev received the Munich award after his previous feature Leviathan had won the ARRI/OSRAM competition in 2014.

Meanwhile, the CineVision sidebar’s jury of producer Roman Paul, writer-director Sonja Heiss, and the Women Film Group’s founder Hyosook Hong presented the €12,000 CineVision Award for the best international newcomer film to the Portuguese director Pedro Pinho’s The Nothing Factory which the jury described as “an energising and highly entertaining expression of agitprop for the 21st century”.

Sonja Maria Kröner’s feature debut The Garden about a German family in the 1970s was the big winner at this year’s German Cinema New Talent Awards which were presented at Munich’s University for Television & Film (HFF) on Friday night.

Actress Annika Meier was recognised for her “serious and straightforward” performance in Arne Feldhusen’s techno trip Magical Mystery, while Julia Langhof and Thomas Gerhold took Best Screenplay for LOMO - The Language Of Many Others.

The four awards were decided upon by a jury made up of actor Edgar Selge, producer Verena Gräfe-Höft - who represented Germany at the Producers on the Move platform in Cannes in May this year - and sales agent-producer Michael Weber of The Match Factory.

This year also saw a FIPRESCI jury convening for the third time to award a prize to a film screening in the New German Cinema sidebar. Tom Lass’ latest feature Ugly & Blind was named as the best film, with the jury applauding “the balance between drama, comedy, and romance” which Lass co-wrote and co-produced as well as playing in the male lead.

Other awards presented during the Filmfest included the One Future Prize to Italian filmmaker Roberto de Paolis’ feature debut Pure Hearts, the festival’s Audience Award to Still Young by David Schlichter and Killerpilze drummer Fabian Halbig, the Kinderfilmfest’s Audience Award to the BBC/ZDF co-production Revolting Rhymes, the White Elephant to the animated feature Rabbit School - Guardians Of The Golden Egg, the CineMerit Award to US actor Bryan Cranston (Breaking Bad, Wakefield), and the German Cinema Award For Peace - The Bridge to Aki Kaurismäki.