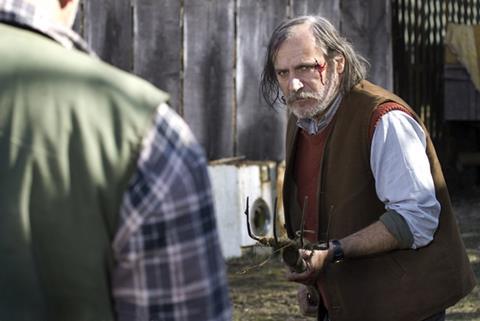 Dominated by a powerful lead performance from globally known Rade Šerbedžija and written and directed by the actor’s son Danilo Šerbedžija, dark comedy 72 Days has won a slew of festival prizes in the Balkans and been submitted as Croatia’s entry for this year’s foreign language Oscar.

In his first feature, Danilo Šerbedžija does a decent job mixing the physical humour that the story implies with more serious themes.

But even with those assets in hand this earthy semi-farce – which was released last summer in Croatia and co-producing country Serbia and has also screened at a handful of other European festivals – may have too strong a local flavour to appeal to a wide international audience.

The elder Šerbedžija, best known internationally for his supporting roles in X Men: First Class, Harry Potter and the Deathly Hallows: Part 1 and other blockbusters, plays Mane Paripovic, the ragged, hard-drinking head of a rural family whose only source of income is the US Army pension that Grandma Nedja still collects because of her husband’s role in World War II.

When Grandma finally dies, Mane talks his brother Joja (Bogdan Diklic, from No Man’s Land), his mentally ill son Todor (Živko Anocic, last seen in Just Between Us) and his restless nephew Branko (Krešimir Mikic, also from Just Between Us) into a plan to maintain the pension by stealing a replacement granny from the local hospital.

Šerbedžija senior, Mikic and the rest of the cast carry off their roles with admirable gusto. And in his first feature, Danilo Šerbedžija does a decent job mixing the physical humour that the story implies with more serious themes, such as the generation gap between Branko, who wants to go and play punk rock in Belgrade, and Mane and Joja, who are still connected to the land and nurse grudges from the nineties Balkan war.

The humour, though, is likely to be too broad for many non-Balkan audiences and the darker themes not sufficiently universal.