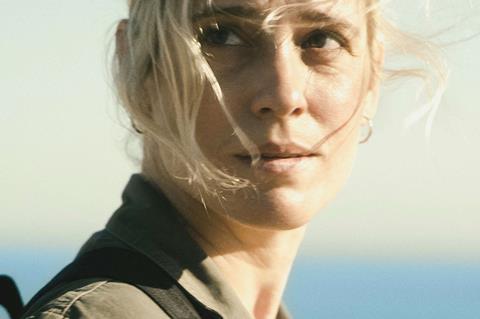 Set against the volatile backdrop of the collapse of the Greek economy, Syllas Tzoumerkas’ freewheeling and full-on drama is a shrill expression of anger, driven forcefully and with a certain fearlessness by a striking lead performance by Angeliki Papoulia as a free-spirited woman who reaches the end of her tether.

A striking performance by Angeliki Papoulia is the jittery, beating heart of A Blast, with her Maria a passionate an open soul who embraces life and love, but finds that passion beaten out of her by a variety of circumstances.

A Blast (which has a on-screen English sub-title of Explosion….though A Blast suits it far better) never resorts to subtext or allegory as other recent Greek films which referred to the country’s economic situation have done, instead it tackles things full on with barely repressed anger and a ‘take no-prisoners’ attitude. Its smart structure, vibrant performances and lusty sexuality should make it of interest to distributors, while festivals (it had its world premiere at Locarno) will likely also be keen.

The editing structure sees the film flit back-and-forth in the life of blonde and forthright Maria (Papoulia), from carefree days on the beach, through her passionate affair with Yannis (Vassilis Doganis) and subsequent marriage, and to her grim realisation that the small shop she runs for her wheelchair-bound mother (Themis Bazaka) is in deep financial troubles. With three young children to look after, her anger – at her parents and the county’s situation – sees her take drastic steps…punctuated with explosions of her passionate anger.

To say that Maria is an emotional personality is something of an understatement, with the film punctuated by her outbursts – whether it be playfully crude banter with her sister Gogo (Maria Filini) or the plentiful scenes of her engaging in lusty and earthy sex with Yannis – which helps keep the film constantly on edge, as if waiting for the next ‘blast’ to hit the screen. It means that things move with a certain pace as the audience is forced to keep up with the constant time changes as the story veers back and forth over the years as Maria’s vibrant story is told.

As she has to try and deal with banks, her highly strung sister (who makes an inappropriate marriage), the fact her husband – captain of a container ship – is always away, her life seems to gradually unravel and she rather quietly (as a contrast from the earlier emotional explosions that punctuated her life) tries to adjust to the fact that her life is not what she thought it may be and takes drastic steps.

As she tells a support group of women:” Today, I want to share with you that I am absolutely unhappy. I’ve lived a ridiculous life. And I don’t know what to do to change it. I got married when I was twenty years old and I have three kids that I never want to see again. Neither them or my husband. From now on I only want to speak with strangers. Like you all. And I prefer the guilt to the life I had until this day”.

A striking performance by Angeliki Papoulia is the jittery, beating heart of A Blast, with her Maria a passionate an open soul who embraces life and love, but finds that passion beaten out of her by a variety of circumstances. Syllas Tzoumerkas (who made his feature debut with Homeland which premiered at the 2010 Venice Critics’ Week) keeps the film tense and edgy as it spirals towards a moody almost existential ending as she speeds alone in her SUV into the Greek countryside, evading police, and simply looking to escape.