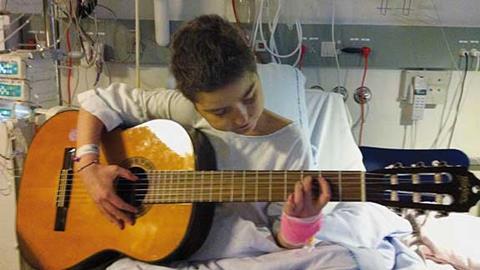 While traditional in structure and format, Mikala Krough’s moving documentary hits all of the right emotional chords as it tells the story of a family trying to live as normal a life as possible while one of the children spends her time battling life-threatening leukemia.

The tension between uncertainty and everyday stability is compassionately and gently illustrated in A Normal Life.

Perhaps not the easiest sell theatrically, A Normal Life still has the charm and strength to work at festivals – it won the audience award at the CPH:DOX festival in Copenhagen – as well as being an easy fit for broadcasters.

Cecilie and Katrine are twin sisters, but to look at them it would be hard to see this if you did not know it. Cecilie has lived with leukemia ever since she was a little girl, and has spent long periods of her childhood in hospital. And even if she has been declared healthy several times, the illness has returned every time.

Despite being now separated, parents Stine and Carsten Bruun try and keep things as normal as possible for Cecile, Katrine and youngest daughter Frederikke, and alongside a life-threatening disease comes more mundane issues such as school, hobbies, bedtimes and food, and a constant worry about not paying an undue amount of attention to one daughter over another.

The film opens with Cecile taking part in her martial arts class, and with Stine the main carer she is in a constant whirl of football matches, children’s friends staying over, food negotiations and the school play. As she tearfully comments, she always feels as if she is letting one of the girls down.

The film dips in and out of the family’s life – with possibly the saddest part that as twin’s Cecile and Katrine grow up they slowly seem to lose something between them, with Cecile’s growth and development slowed up due to her treatment – with the toughest decisions coming when Cecile is offered a bone-marrow treatment that may finally offer a cure.

The tension between uncertainty and everyday stability is compassionately and gently illustrated in A Normal Life, which while it never allows itself to be maudlin does in a poignant and honest way show how one ordinary family deals with extraordinary circumstances.  The film’s soundtrack is composed by the Icelandic filmmaker Dagur Kàri.