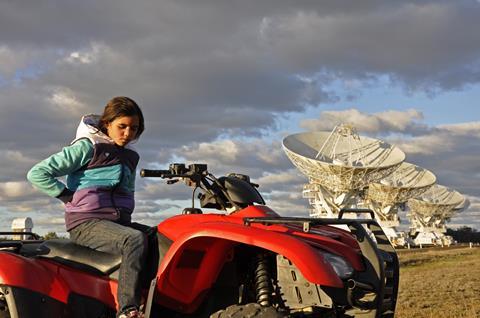 Technically assured and often rather engaging and intriguing, the cleverly shot drama Above Us All weaves a relatively straightforward tale of death, loss and emotional adjustment. The bold shooting style – the camera turns in 360 degree circles and is presented in 3-D – makes the viewing experience all the more fascinating, though ultimately can do little to cover up the rather plodding story.

It is bold and striking film that can be absorbing at times.

Pretty much all of the film is made up of uncut circular camera movements (shot at 50 frames per second), certainly a novel approach and one that often works to good effect. The use of non-professional actors helps accentuate the docu-drama tone of the story, with young lead Shayleah Sands especially impressive, but for a film under 100 minutes it feels rather too long for its modestly dramatic nature..

Its opening section is by far the best part of the film as the film revels in the wide and lush spaces of Australia. Eleven year-old Shay lives with her Flemish father Koen (Maarten Baes), indigenous mother and younger brother near to the array of massive telescopes at Narrabri in New South Wales, and loves her life in the outback. When their mother dies the children are taken by their father to Ypres, Belgium, to try and get their life back into order.

Shay has a hard time adjusting to her mother’s death, and set against the backdrop of a location infused with memories of death from World War I she bickers and fights with her father, has problems fitting in and gradually has to find a way to move on.

The 360 camera turns and links to space (via the telescopes) and death are meant to foster questions about our position in time and space, and while there are hints at spiritual questions (via indigenous storytelling) the film never quite reaches the emotional depths it hopes to. A rather heavy-handed montage of pictures of dead and mangled bodies from World War I is blunt rather than moving (and the message about death is clear through the film) and often the non-professional actors struggle to convey the loss that drives their journey from Australia to Belgium.

It is bold and striking film that can be absorbing at times – there is a beautiful 360 shot early on of Shay on her quad bike close to the telescopes – and Above Us All could play well locally in Belgium and the Netherlands and also intrigue dirstributors looking for event 3-D cinema, but there is a niggling sense that the novelty of the shooting style papers over shortcomings in the script. But as a clever piece of event cinema it is to be applauded.

Screenplay: Kim Niekerk, Patrick Minks, based on an idea by Kim Niekerk