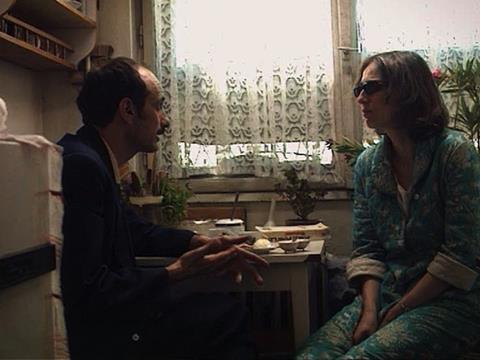 The only eventual clients for Gabriel Achim’s negligently shot, lame digital debut, may be such survivors of the ex-communist regime who would be willing to forego every cinematic expectation they might have, for a short nostalgic stroll through memory lane into their own past. It wasn’t much fun living through it, and through the perspective of 25 years it might be considered amusing, but only to those who are familiar with the background. The rest will balk and go away.

The picture literally shoots itself in the leg with its dismal look - which may have been intended as a clumsy satire - on the cinema favoured once by the official regime.

Using soccer events to mark recent historical milestones has often proved successful in the past, to wit Fassbinder’s The Marriage of Maria Braun, and Achim goes back to the same ploy, bringing up the phenomenal performance of goalkeeper Helmuth Duckadam, who stopped four consecutive Barcelona penalty kicks in the 1986 European Championship, getting his team, Steaua Bucharest, its one and only European Cup ever. The film world premiered at the Transylvania International Film Festival.

For the first part of Adalbert’s Dream(Visul lui Adalbert), this is the main topic of discussion between the protagonist, Iuliu Ploscaru (Gabriel Spahiu) and his wife, Coca (Alina Burzunteanu), his kids, his lover Lidia (Ozana Oancea) he visits on his way to work, and then his colleagues and his boss (Doru Ana) at the factory where he is employed as an engineer, in charge of Safety at Work. The soccer victory is a rare source of national pride in an existence full of frustrations, humiliations and all of the rest of the dubious moral shortcuts that are an inevitable part of their daily routines. No matter how sly they think they are, the system prevails after all.

All this comes through Achim’s film clearly enough but the myriad of details never gels into a real plot. The limp story drags its feet through long, tiresome sequences packed with repetitive dialogue. Gradually it leads to the pre-ordained festivity organized by Ploscaru and his colleaues to celebrate the 65th anniversary of the Romanian Communist Party (PCR), in the course of which there are the regulation self-congratulatory speeches and a short film prepared by Ploscaru himself on safety at work, which looks like a clumsy parody on silent films.

It is followed by a documentary on his lover, Lidia, who lost an eye at work out of her own negligence, as her boss is quick to point out.  All through the proceedings, everyone is on edge, terrified that one wrong utterance might cause some kind of political disaster. This finally arrives, when a technician who shunned the celebrations to use his tools for private purposes, loses a hand working on one of the machines. At which point the picture wraps up with the management reconstructing the event to establish who is to be blamed for the accident… for someone has to pay the price.

With barely any direction to speak off, allowing the actors (some of them, like Oancea and Mimi Branescu, have distinguished themselves previously) to do their own things and providing no decent lighting for the camera, the picture literally shoots itself in the leg with its dismal look - which may have been intended as a clumsy satire - on the cinema favoured once by the official regime. Today it looks just dismal, no more.