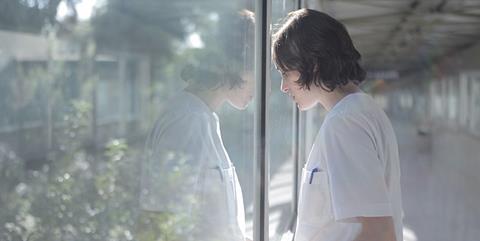 Life is a baffling but also intriguing imitation of itself in Greek director Yorgos Lanthimos’ follow-up to well-received arthouse hit Dogtooth. Scarcely less bizarre than that droll excursus about a family that lives, loves and even speaks at one surreal remove from the rest of the world, Alps denies us such traditional cinematic handholds as rounded characters with backstories; a plot with an identifiable moral arc; neatly tied narrative ends; an easy-to-read ‘message’. Yet the film only very occasionally feels like a piece of self-indulgent arthouse mystification: most of the time, this story of a team of melancholy, oddball characters who help (or profit from) the bereaved by standing in for departed loved ones holds us emotionally and intellectually - and ends by saying something profound about a world in which ‘reality’ is just another TV format.

As a dour tragi-comedy about a bunch of rule-bound fakers, we can at least say that Alps nails a certain zeitgeist.

Lanthimos is clearly fascinated by alternate families that operate according to their own set of rules. Alps is a sort of Dogtooth 2 in this respect - and the cultured urban audiences turned on by the sheer kookiness of that film may feel a slight sense of dejà vu here. But then again there’s a pleasure to be had in watching the progress of a European auteur who has something genuinely knew to say, and a genuinely new way of saying it (the ability to make black comedy, poignant melancholy and dark menace coexist is not the least of Lanthimos’ talents). With his third feature, the director is becoming a name to watch on the international cineaste circuit, and Alps is likely to trickle into most of those territories that still have an appetite for challenging cinema.

As off-centre in its narrative progression as it is in its widescreen cinematography - full of odd framings, cut-off heads and focus pulls to seemingly irrelevant details - Alps deals us fragments of story from a pack that seems to have lost a few cards. There’s a young rhythmic gymnast (Lebed) working on her act in a big empty gym with a cruel and corpulent trainer (Vekris); a tense, unhappy hospital nurse (Papoulia) who for some reason that immediately seems suspect takes a special interest in the welfare of a teenage girl, a keen tennis player, who has just been rushed into intensive care following a car crash; and the nurse’s colleague, an intense, serious paramedic (Servetalis).

All four characters come together during a meeting in the same cavernous gym, when we discover that they are members of a recently-founded secret society which their leader, the paramedic, decides to call ‘Alps’ (a name chosen, among other reasons, ‘because it doesn’t reveal what we do’). He himself, he announces, will henceforth be known as Mont Blanc; the others can choose whatever major Alp they like. Eventually, around a quarter of the way in, the revelation comes that explains at least some of what we’ve seen up to now: the four members of Alps stand in for people who have died, so their relatives can continue to be with them. They learn scripts provided by the family, dress in the clothes of the deceased, carry out little tasks or chores.

It’s the nurse - who may or may not be called Anna - who soon becomes the focus of our attention as she juggles home life with an ageing father (but then again, is he really her father, or just another client?) with two or three surrogate gigs. The main one is to stand in for the tennis-playing teenager, who didn’t pull through. Gradually we realise that Anna is concealing work from the authoritarian, controlling Mont Blanc, and branching out on her own as a ‘freelance’ surogate. Along the way we see the four Alps - none of whom seem to have much talent for their chosen jobs - rehearsing stilted lines and playing out awkward scenes.

Hollywood might have fashioned a weepie or a thriller out of the same material - and there are echoes here of some of Hitchcock’s fascination with surrogates, from the Roger Thornhill/George Kaplan of North by Northwest to the Madeleine/Carlotta of Vertigo. But Alps is so intriguing because of what it refuses to explain. Do these four characters have home lives, or is everything we see an imitation of something? Are they acting as surrogates for each other as well as external clients?

It’s also a film which manages to juggle absurdist comedy with bleak tragedy, a yearning desire for human warmth with outbreaks of sudden violence, all the while maintaining an impressive control of tone. It would be far fetched to interpret Alps as an artistic response to the Greek debt crisis, but the sense of a world living on borrowed time (and money) is there in the nowhere locations: the tatty suburban streets, the peeling paint, the drab interiors.