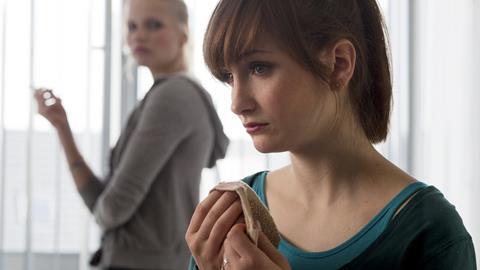 A film full of surprises from Dutch first time feature director Marco Van Geffen, Among Us (Onder Ons) is a chilling drama which appears to be a social drama before turning into something else entirely. A confident, cleverly constructed and well-acted feature which builds a pervasive sense of evil amid the creature comforts of suburban Amsterdam, the film is also a fascinating glimpse into the lives of eastern European au pairs and their bizarre lives living with well-to-do western European families.

A Rashomon-style study in different perspectives and misunderstanding.

The film, which played in Locarno and Toronto, will open in the Netherlands through Cineart on November 10, although surprisingly it didn’t win any prizes at the Netherlands Film Festival last week. Elle Driver picked up international sales rights and could stimulate buyer interest especially if the surprise elements of the story could be emphasised. Further festival play is guaranteed.

Van Geffen’s skill here is to tantalise the audience and continually change their expectations. The story is told in three parts eaching showing a different perspective on Polish au pair Ewa (Bak) and her arrival in Holland to live with a sophisticated Dutch couple and look after their baby. Although she adores and is adored by the baby, she is quiet, inscrutable and unresponsive to the overtures of friendship from the parents Ilse (Lodeizen) and Peter (Clemens). Indeed, Peter and Ilse are in a panic after she arrives home late one night with the baby and, when she comes back drunk later that week, they fire her.

But there is more to the story than meets the eye, and in the second section, we see Ewa from the perspective of another Polish au pair in the neighbourhood, the gregarious and loud Aga (Rybicka) who wants to party and meet men, even while a rapist killer is on the loose in the area. In the third section, we see the sequence of events from Ewa’s perspective and everything becomes eerily clear.

Van Geffen doesn’t tell the story with flash or trickery and it would be hard to describe the film as a thriller. It’s more a Rashomon-style study in different perspectives and misunderstanding, but the creeping sense of dread and hints that Ewa has been a victim of rape in the past – perhaps even had a baby as a result of it - gives the film a psychological dimension which makes it unusually gripping.